Traditional costume from the Opoczno region

The region of Opoczno it’s a part of Poland from Góry Świętokrzyskie to Mazowsze. Around the Pilica River there are beautiful highlands forests called Pustynia Sitowska. The industry havn’t grown there very well and people mainly worked in farm-trade industry. The outfit from Opoczno region has changed a lot during last 150 years. It concerns mainly the colours and the technics of sawnings and ofcourse the embroidery. The oldest material was the stripped wool sew into red-white, black-red-white and black-white stripes. Later materials started to appear as more organge and before the II World War they appeared as blue,red and green. The embroidery also was affected by the fashion. The oldest embroidery was white or red. From the end of XIX and in the beginning of XX century they started to make a cross embroidery connected with other technics. Embroidery mostly was in geometrical or floral design.

Men outfit
The men shirt has changed with passage of time. There were 3 kinds of men shirt which most important difference could be seen in form of collar and front of the shirt. The oldest form had embroidered collar and cut front also embroidered and buttoned. It had also embroideries on the sleeves. In summer and for work men wore trausers (portki). They were made of white or coloured black or blue thread. In colder time men put few of them. For such trousers men put the shirt outside the trousers. For the holiday outfit men had corrugated trousers. The trousers legs were put into high black shoes and shirts were put inside the trousers. They were sewn from wool. Lejbik – the typical black vest made of stripped woolen material was very simple. It was fit to the figure with specialy made stripe with buckle. They were put on shirt till 1890. Lejbiki were one coloured: green, blue, sometimes stripped. Till 1890 men used to wear “sukmany” some kind of topwear. The colour of sukmana depended on the sheep wool and its preparation. Sometimes they were sewn from white material. Men used to wear belts on the Lejbiki or the Sukmany. There were many methods of tiing the belt. But for sure men used to tie them down many times with 2 ends left in the left side of the belt. The most typical belts were made by women in primitive workshops and they had their ends decorated. The men headgear depended on the season of the year and the rest of outfit. They used to wear rogatywki, black hats but most of all maciejowki. It was round cap with canopy made of navy blue material with black taff canopy. They were worn by the bachelors and during the wedding they were decorated on the right side with bouquet of flowers.

Women outfit
As the others the women outfit has changed man times with passage of time either in coulours or in form. On turning-point of XIX and XX century the women outfit consisted of : headgear, shirt, shirt, zapaska waist long and zapaska for shoulders, shoes and jewelery. In this time the most tupical headgear was a woolen bandana with floral designs. If it was a bandana of maid she would have some dried flowers put on it. Bonnets were used only by married women in holidays outfit. Women used few kinds of it they had different forms and decorations. The most popular was tule bonnet with bug and high head decorated with tule stripe and geometrical and floral embroideries. Women shirts were sewn only from linen materials but after some time women started to use also cotton ones. Shirts, independently from the used material and the time when they were made,  had the same form and the difference was only the for of the collar and the wideness of cuffs. The difference was in the decoration and embroideries.  Embroideries in the older shirts were made in calm tonation and in the new one the pallete of coulours was very wide. The shirt was always tied with zapaska. Zapaka was made of wool and it colour changed as same as materials of skirts. Skirts had different colours, the style of decoration and form. The most popular was a skirt with tied down breast. The length of skirt depended on the length of material and the width was always from 3,5 to 4 meters. Zapaski worn in the begining of XX century were still wide and fit to the lenth of skirt. Those worn later were more short and more narrow. When women wore short one they obeyed the rule to have a contrast between the skirt and the zapaska. For the secure of cold days women used zapaski for shoulders. As as tie women used krajki. 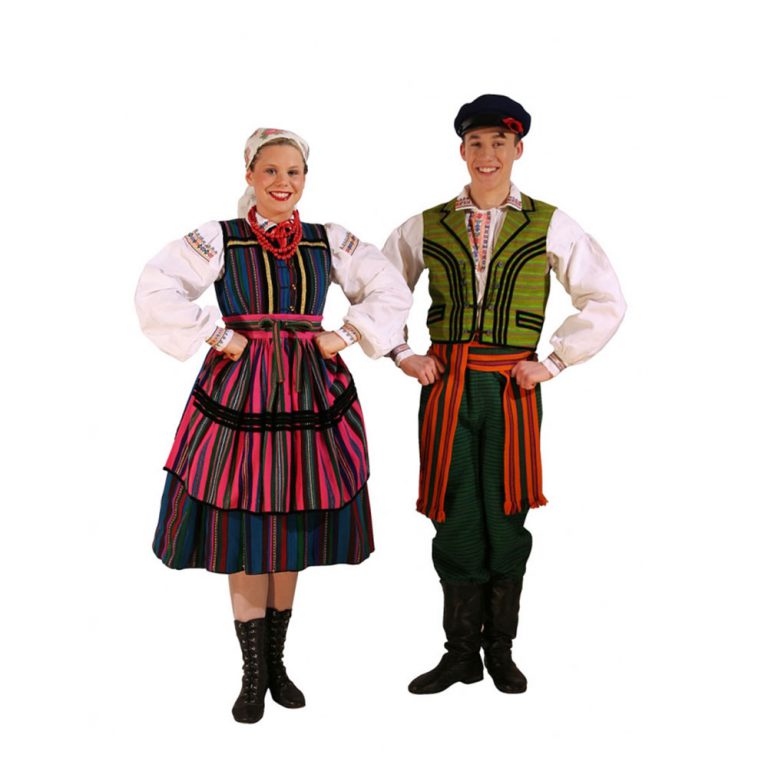 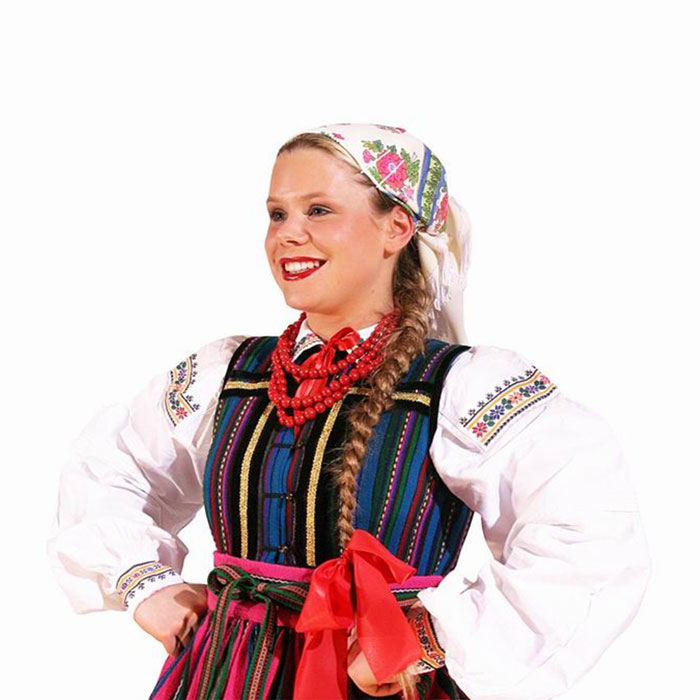