The mountaineers of Silesia live in the small part of the Western Karpaty called Beskid Sląski so the South-East region of the Cieszyn Silesia which in the political-administrational aspect belongs to the Cieszyns state. It is mountain region on height put 400-900 m. above the sea flat highly forested cut with the rivers with the most important Wisla and Olza. Mountains goes smoothly to Pogórze Cieszyńskie in the north-west part, on the east they insist as a boarder with Beskid Żywiecki and in the sout with Czadecki and Frydecki.

Women Outfit
Maids didnt wore any headgear, and they put their hair into a braid. They decorated it with two ribbons most often pink or red. Married women were obliged to wear bonnets and bandanas. Hair put into a braid was made into a coca and and then they put a bonnet and after that a bandana. Mountaineers used to wear two shirts : ciasnochę and kabotek. Cisanocha was an underwear but women who worked on the field wore only it. On the ciasnocha they used to put kabotek. It was sewn from thin material for example batist. It had two front parts which were left free, the upper part near neck as same as sleves after wrinkling sewed into narrow oszewki. Kobot was decorated with red or black embroidery mostly with floral or geometrical pattern. The lower part of the outfit present two zapaski, first bigger and the second thiner in the front. Rear zapaska called fortuch was sewn from black coloured material thickly gathered and corrugated. Sometimes it was coloured into brown. 200 years ago fortuszek used to be white zapaska. Nowadays such kind of zapaski were substituted with navy blue or blue materials or with thickly embroideries. Mountaineers used to wear sheepskin coat, gunia and łoktusza. The seepskin coat and gunia were the same as worn by men but łoktusza was assigned only for women. The traditional footwear were kyrpce the same as the men. In the holidays they were tied with a ribbon and daily with a string. In winter they used to wear stockings and socks. They’ve  never worn jewelry.

Men Outfit
The first men’s headgear was a hat called kłobuk. It covered not only head but also shoulders so it was often used by pastors. The kłobuk for holidays had its head tied with a string made of sheep wool and it ends fell down on shoulders. But after 1880 men used to wear light-gray hat with cupolic head and small round, it looked as a bowler. Before the Scond World War popular was a hat which gathered the atributes of those two headgears. They were gray they had form of the black one and they were decorated with red strings. In winter time mountaineers wore two kind of headgear : branice and mycki. The men’s shirts had a form of poncho, they were long and narrow, they reached knees, always  put into trousers. They had simple sleeves, on the chest it had a rip tied with res ribbon. Men had 3 kinds of shirts sewn from 3 kinds of linen dependent on which ocassion. The holiday shirts were decorated with a sign on the chest, the marrige shirts had specific sewings in near sleeves and sometimes near neck. The sign was mostly red or black and the sewings were brown. Mountaineers from that region used to wear trousers made of white material.
They were always very simple in two forms. On the right part of trousers was a slit and on the left side a pocket. Trousers mostly didn’t have any decorations. The typical top cloth was bruclik. It was sewn from black material but only young men wore red ones. In the beginning it reached strip line but from 30’s they reach hips. They were not buttoned but only tied with a red ribbon tied on the last two buttons. The top cloth worn on the shit was poncho form – Gunia made of thick dark-brown material. The footwear of a man were kyrpce. Each man was making them for themselve on specific wooden form. Before the kyrpce were put on they put socks called kopyce. The decoration of men outfit was a belt. 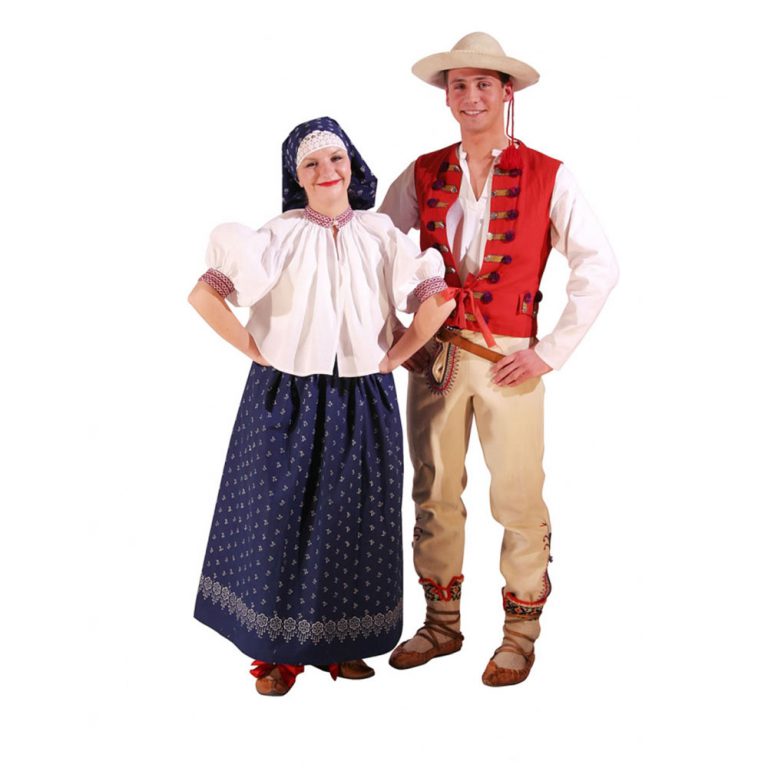 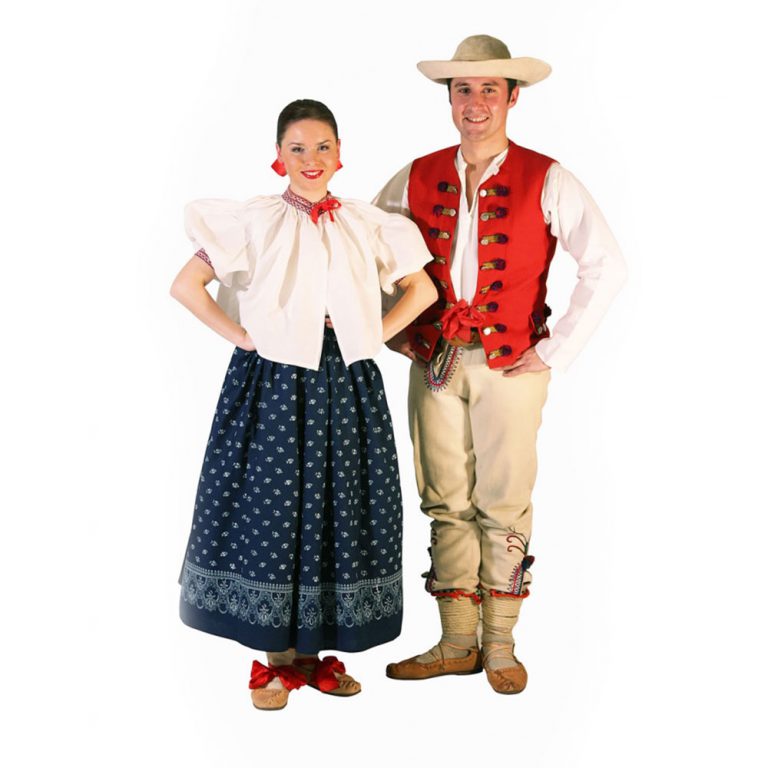 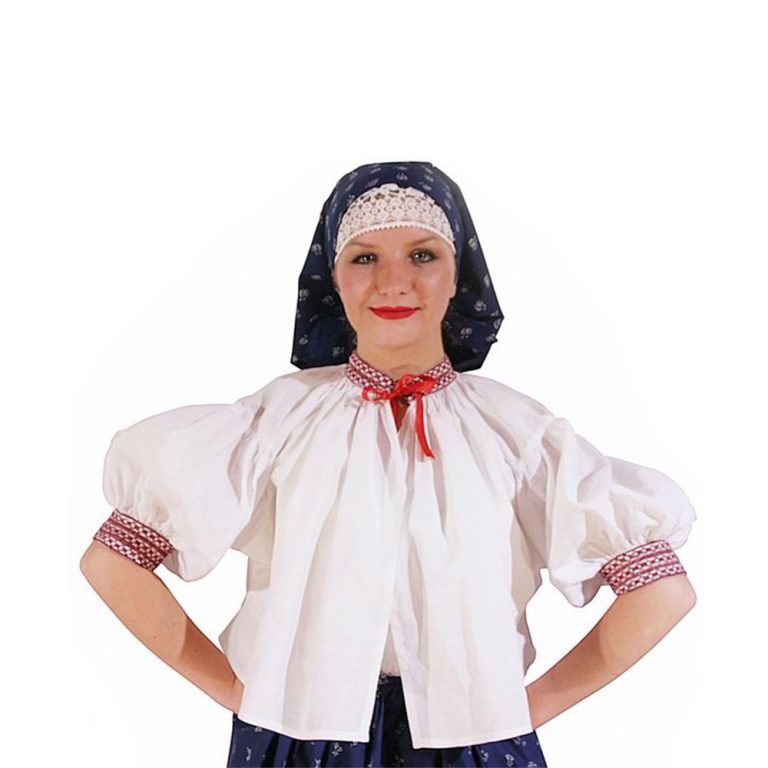 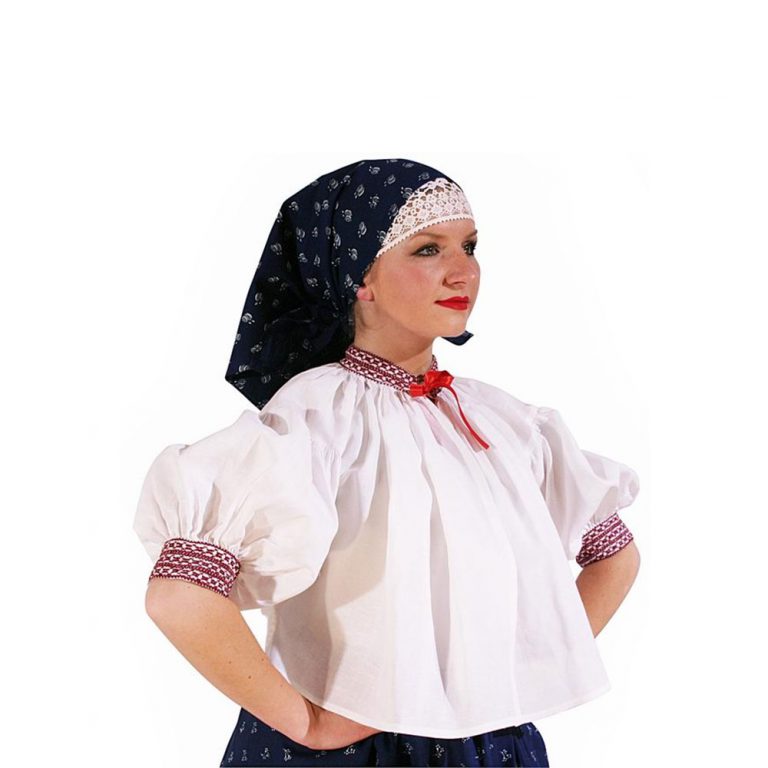