Traditional costume from the Rzeszów region

Women outfit
Maids in XIX century put their hair into a braid and decorated them with flowers and bandanas. After the marriage brides had to wear chamełka – the reed bonnet with bandana. The bandanas were worn both by married women and maids. They were worn eihter at home or at work and by married women also in church. They could be made of linen, cotton all in form of square. The small bandana was made of cotton material, it was decorated with white or red-navy blue embroidery. Shirts were decorated with floral designs, flat or holed and blue, from the end of XIX century. The sleeve of the shirt was as long as hand and it was waved in its upper part. Skirts were made of white material but also there were skirts made of wool in different colours. They could exist as with floral designs or clear. In the ond of XIX century and in the begining of the XXth there could be met a one colour cotton skirt. The zapaski also has changed as the skirts. In the XIX and the begining of XX century zapaski were made of material and decorated with beautiful embroidery with red, white or blue thread. The corsets worn in the end of XIX century were made of silk velvet, tied or buttoned with little plates. Firt they were made of black material but later also from navy blue and red. After some time the decoration of corstes started to be very wealthy. Katanka was a kind of womens kaftan. It wa sewn dependently on the season of the year from different materials : woolen, cotton with silk velvet embroideries and english. Instead of the silk velvet bandanas they used an embroidery from silk.

Men outfit
As a headgear for holidays and normal days men used to wear a straw hat. But they had also a different hat – the black one. It had its curve of round put up. The head of hat was decorated with silk velvet bandana with stripe. In the end of XIX century was born typical holiday shirt. It was decorated in front with typical hole and white embroidery. It had a 3cm wide colllar and wide and long sleeves. Trousers called “sukienienki” were sewn from blue material in different tint. Trousers were decorated with “oblamówki” – the red patterns with colourful kind of silk. The vest was made from the same material as trousers. It had different number of buttons and wool flowers between them. On the sides, vest had pockets with flaps cut in a form of teeth. The men topwear was a brown long taff coat. It was decorated with woolen stripes. The next element of this outfit was a belt. It was worn on a shirt or on coat. It was long and narrow ended with a buckle. It was made of white taff leather 5 cm wide. It was divided to a tiing part and falling part. The first one was decorated with metal circles and wool stripes. The second one was only decorated with a stamp, circles and stars. 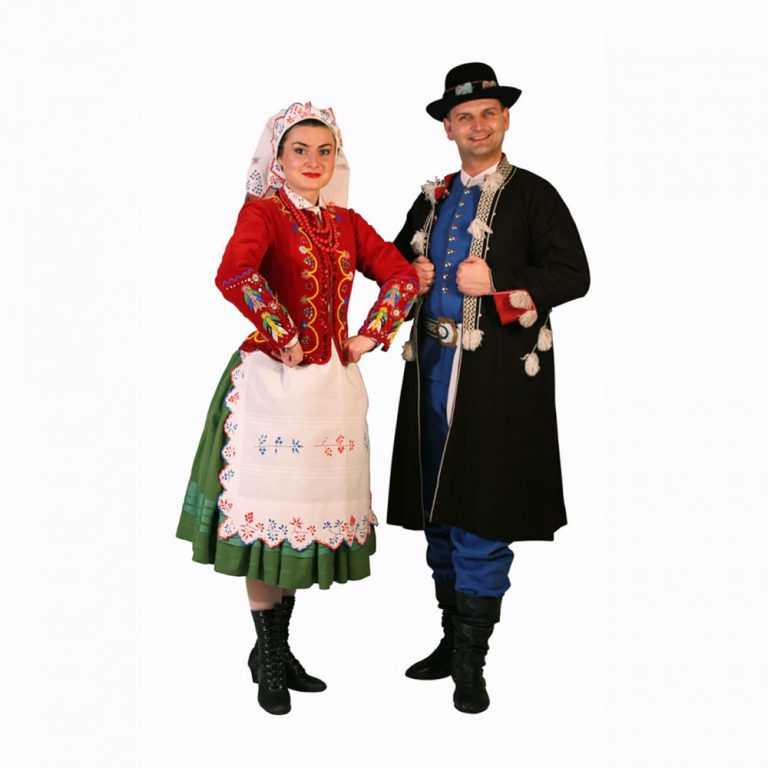 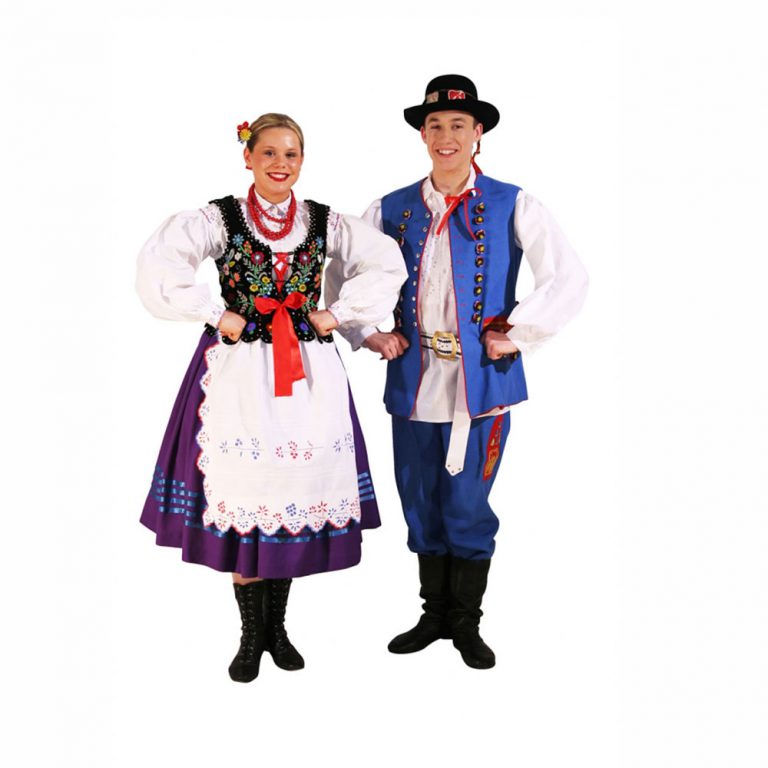 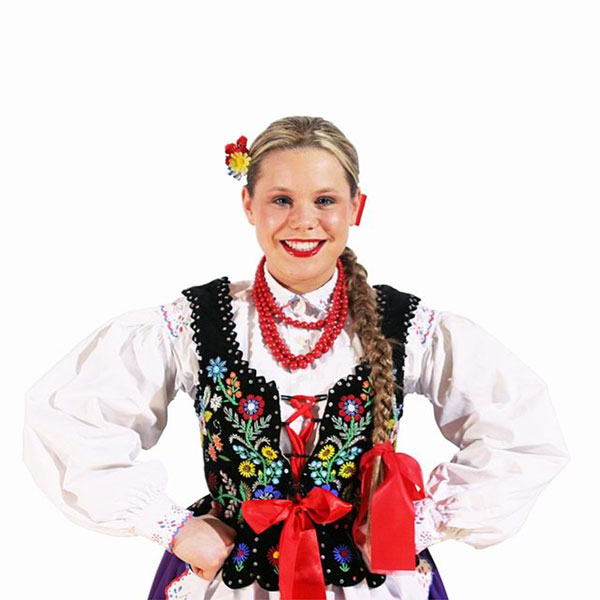 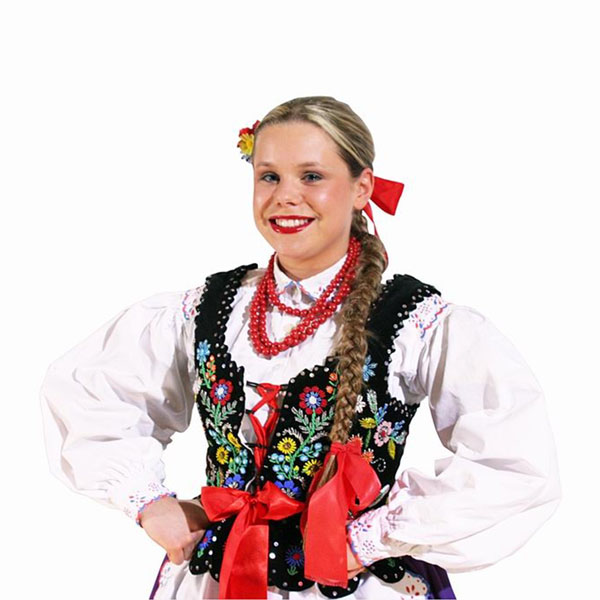 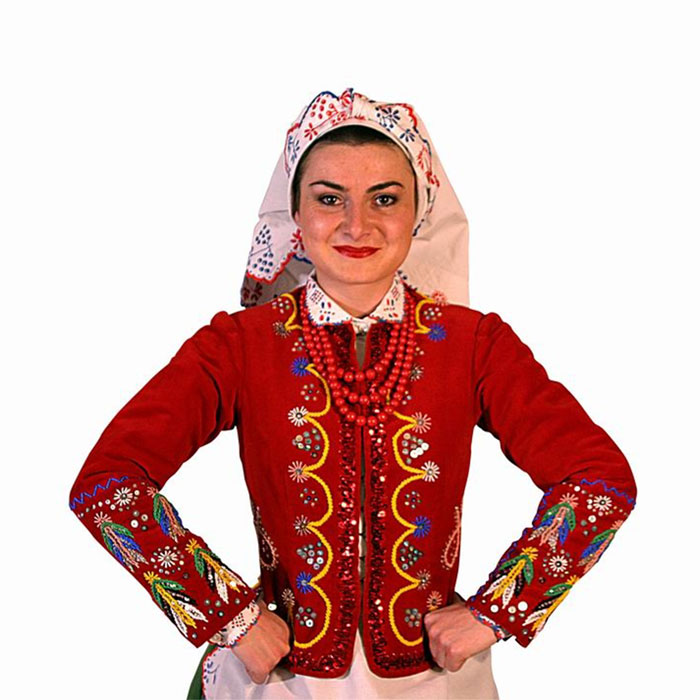 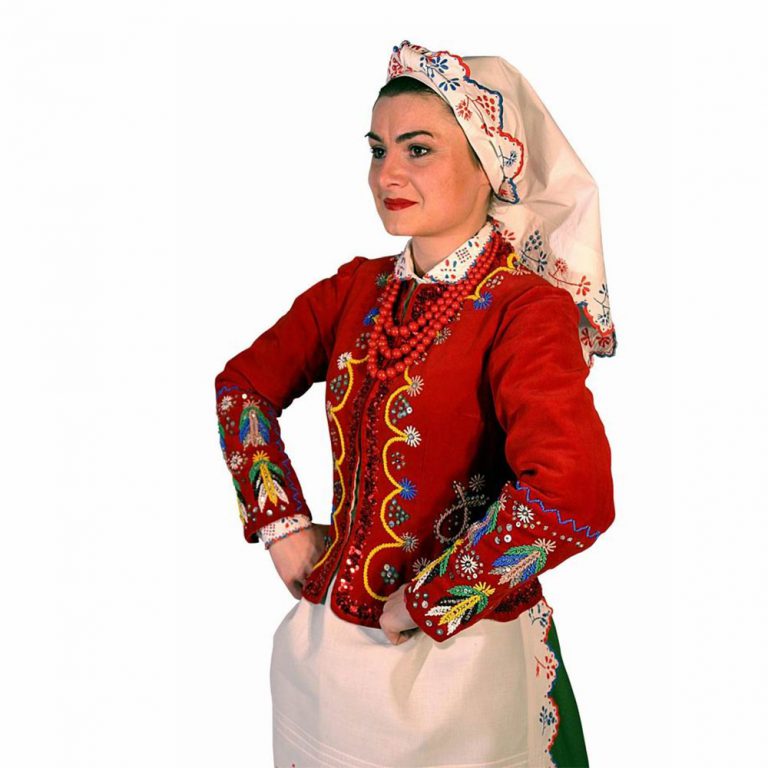