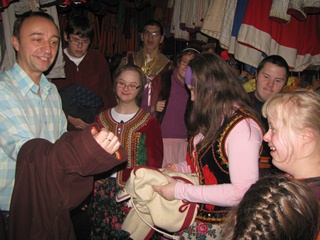 Youth with special needs from the Group of Special Schools No. 105 asked the Management of Folkloristic Group “Wielkopolanie” for a possibility to learn about Polish folklore from „behind the scenes” point of view.

Within the “Musical Variations” project, secondary school students had the ability to learn about Polish culture, music and costumes  –  but not as they were displayed during concerts. They wanted to see how the dressing room of the group looks like, how to prepare costumes for the concert and how to put on each of the outfits.
From the very beginning the big surprise for the young guests was the amount of costumes that “Wielkopolanie” have accumulated. After a brief introduction, Group Manager – Mr. Peter Kulka invited guests to the headquarters of the office – the wardrobe, where he began his presentation. Children immediately drew attention to the costumes of Łowicz region. Despite the costume’s weight girls wanted to wear that colorful outfit. After that it was the time to try outfits from the Duchy of Warsaw, „kontusz” and so on, until everyone knew eighteen regions which “Wielkopolanie” have in their collection. There was no end to the fun and laughter. Guests were asking valuable questions, and after an hour they immediately recognized which of the clothes were worn by married women and which by young ladies.
Afterward, it was the time of getting to know headgear assigned to the individual costume in which disabled children from Special School were dressed and gathered youth had no problem with that task. It was a great surprise for the hosts when children with a dose of shyness pulled out their fingers to show a cap or a wreath matching the costume in which they were dressed. All of the guests were most surprised by mob-caps from Greater Poland region. Headdress of women from Szamotuły, Biskupizna, “kozioł” (bagpipe)

regions or headgear of residents of former villages of Poznan city and Bamberka’s hennin had created an unforgettable impression on the young people. Poznań Bamberka’s

outfit, which Ms. Marta Ostwald put on selected girl, caught gathered youth in astonishment. Nobody could believe how many items it is made up from and how it is being put on.
Subsequently it came to familiarize children with the musical culture of the region. Guests could get to know the instruments specific to our region: bagpipes known as “dudy wielkopolskie”, “Maryna” and “kozioł weselny” (wedding goat). One of the young men could even try to play on them.
At the end of nearly two-hour program children received modest gifts from a Group’s dancers. It was a meeting that will always remain in the memory of those who gave lectures and Group’s Management would like to sincerely thank the young people from Special School for visiting their headquarters and their large commitment during the lesson of Polish culture.
PW