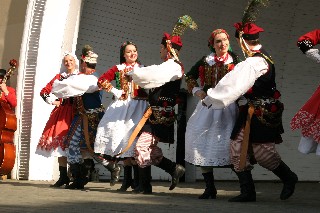 The year 2009 has started with three performances called „Słynne polki i marsze”. In January our group performed during the big event by the occasion of XX anniversary of children folk dance group “Cepelia – Poznań”, where started a lot of dancers from our group.

Next “Wielkopolanie” performed during graduation party of Complex of economic schools, on charity party organized by VII High school and during the old melody’s evening in Paragraf – Poznań lawyers club. Traditionally during carnival the jubilee XXV Carnival Party of Wielkopolanie Folk group took part. As in every year dancers invited their friends so as to spend this evening playing with their dearest . Dancers prepared the special artistic program. It was Jordan and Indian dances going back to the tournee, made by the group last year. Guests could also see the photos took during tournee in India, Kuwait, Turkey and Jordan which have taken place in 2008. A lot of surprises have watched for guests also during the big lottery.

In March Wielkopolanie started the cycle of performances called “Zatańczyć Chopina?” which premiere was conducted on the first of March in The Fireplace Hall Of Poznań Cultural Center ZAMEK. The cycle is a part of the bigger project “Chopin na pointach, obcasach I pietach”. The aim of the project is trial of dancing composed by Fryderyk Chopin with different dance techniques. The whole project was lead by Teresa Nowak.

In the first part of the year Wielkopolanie made 4 performances of the cycle: Poznań, Suchy Las and Piła.

The group organized also the trainings for wielkopolska teachers together with the Association of Teacher’s Development. Thanks to cooperation with the Association another time the first level course4 of national an d regional dances for the teacher was conducted. The trainers of the course were Jadwiga Banaś and Piotr Kulka and the accompanist was Barbara Florek.

In May dancer showed their artistic program during the Sport ‘s Day of Adam Mickiewicz University of Poznań, on the physics department in Morasko, where prof. Bronisław Marciniak rector of University started the ceremony.

On 16th of May another performance took place in Ostoja Restaurant in Pobiedziska. In June the performance in cycle “Zatańczyć Chopina?” in Piła took place.

In the first weekend of June the group presented itself in the beautiful forest scenery, on meanders of the Warta river in Puszczykowo as the part of Puszczykowo days, and in specially prepared with cooperation with Mercury Radio performance – Meet the folk in Wilson Park in Poznań.

In the first part of the year 2009 “Wielkopolanie” performed 236 times for the big public in the whole Wielkopolska.