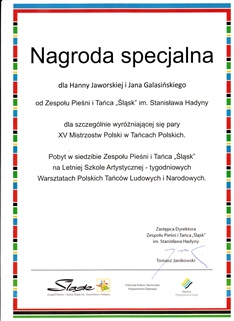 Folk group “Wielkopolanie” was represented by two pairs competing in the V category – Agata Pospiech with Hubert Gramse and Hanna Jaworska with Jan Galasiński. On Friday afternoon, like many other participants of the Championship, they took part in the First National Symposium “Polish National Dances. Mazur – dance from Mazowsze. “While they listened to three lectures:

The championship was attended by over 120 pairs representing 24 centers across Poland. Tournament qualification lasted the whole Saturday.  This day,Wielkopolanie performed wonderfully, both pairs were qualified to the semi-finals of the championship. Sunday was entirely devoted to compete in the finals. The accompanist was orchest

Hanna Jaworska and Jan Galasiński were qualified for the finals.  Finally they got 4th place.

Nevertheless, Wielkopolanie were awarded by Śląsk Folk Song and Dance Ensemble and received  a special award for the most outstanding pair of the championships. Both winners and the whole group is very pleased from this award.

Polish Championship in Wieliszew once again turned out to be a unique celebration of Polish national dances. Everything thanks to the organizers, who took care of the smallest detail that participants and the  guests felt very well in Wieliszewo. We hope that the next tournaments of Polish dances will bring more success to Wielkopolanie folk group.