„WIELKOPOLANIE” AT THE WEDDING 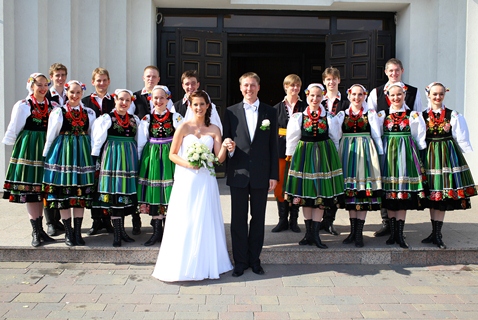 Karol Mazurek is long-time member of Folk Group “Wielkopolanie”. His career began, as he was seven years old, in The Children’s Folk Group “Cepelia-Poznań”. After eight years, he become member of group “Wielkopolanie” and since then he raises the hearts of audiences not only in Poland but throughout the world.
While in college, in 2005, he met Eve. Since that time, they became an inseparable pair, which resulted after four years in their betrothal and  later led both of them to the altar.
After the ceremony, the couple left the church through the guar

d of honor created by the dancers dressed in costumes form Lowicz region. At the front of the Church, band and dancers presented special repertoire of songs from various parts of our country for the Newlyweds, which was performed during the submission of wishes by the crowd of gathered guests.
At the end, the Bride and Groom’s car was stopped by a team of dancers for the traditional donations which bodes luck for newlyweds. After that – wedding party until the dawn.

The management team and the dancers wish much of happiness and joy to the Newlyweds in their new way of life !!!