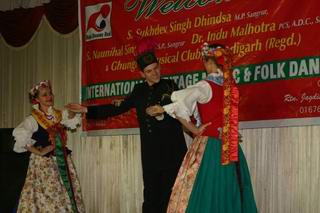 On the second half of November for the first time ever Folk Group “Wielkopolanie” went to perform in front Indian people.

India is an incredible country where are meeting all religions, political ideas and philosophical conceptions. Between high hits of Himalayan Mountains and sandy coasts of Indian Ocean took its place very rich and log history which made this part of the world one of the most differential, interesting and beautiful country.
On 19th of November dancers started 36-hours-long journey to see with their friends from India which they had met on March at the International Festival in Jordan. After 8000 kilometers “Wielkopolanie” finally reached sunny Chandigarh, city situated at the foot of Himalayas.
Chandigarh is one of the most beautiful cities in India. It was built by Mateusz Nowicki and Le Corbusier in 1956 in place where meet two regions – Punjab and Hariayana, and that’s why Chandigarh is an capital city for both of them. This is a place of perfect order where anyone can find his place. One of the reasons for that is fact that the city was build in similar way that cities in Europe, so tourists can feel here like home. Chandigarh is often called City Beautiful.
When dancers got out from the bus they have been welcomed by a very traditional Indian way – by garlands of flowers.

Already the same day the local press was waiting at the conference and photo session.

After few interviews and some photo shots “Wielkopolanie” had been invited for an dinner opening the festival.
Next day was full of attractions – dancers for the firs time had an opportunity to ride rickshaws, that were driven by… themselves. And even left side riding direction was not a big problem for them. After that “Wielkopolanie” went to visit Rock Garden which is build of rocks, broken plates and pieces of glass. They saw as well Sukna Lake that lays at the foot of Himalayas. In the evening dancers performed for the first time for Indian people. Specially prepared presentation that contained national dances: kujawiak, oberek and krakowiak, dances from region of Zachodniej Wielkopolski, dances and songs from Silesia, Rzeszów, Beskid Śląski and Kraków Wschodni have w on hearts of spectators. That’s why on the next day there were news about “Wielkopolanie” in all the most important regional newspapers such as: „Dainik Bhaskar”, „Hindustan”, Punjab Kesari”, „Sohni siti”, „Chandigarh Kesari”, „Handigarh Bhaskar”.

During next concert on the following day “Wielkopolanie” have presented their dances and songs at the main place of Chandigarh enrapturing the audience with their skills. Together with Spanish belly dancer, that as well was invited to the festival, obtained great applause.

Next day dancers could have some rest – they have visited Pantero Garden, king’s residence and fort. Besides sightseeing one of attractions was possibility to ride a camel. On the way “Wielkopolanie” could see other face of India – the life on province showed them that it is a country contrasts and differences.
Sunam is another city where “Wielkopolanie” have presented their culture. They have been welcomed by local government’s personalities and by director of Rotary Club who organized the concert. The gartered audience could watch for three hours spectacle of Polish, Indian and Spanish artists. “Wielkopolanie” have been a great attraction for local people because it was the first polish group that visited this city. That’s why organizers showed to dancers some of local monuments as well as the modern football stadium where “Wielkopolanie” met with people to give them some autographs, and take some photos.

Sikh temple and Rose Garden are other wonderful places of Punjab that dancers had opportunity to visit. The Nadha Sahib is one of ten holy places for Sikhs which was built in 1700. Rose Garden , a gift from first Indian prime minister to Chandigarh habitants, in a complex of gardens where you can find more than 300 kind of roses gartered by colours.

The last day “Wielkopolanie” have performed at Girls College in Chandigarh where audience have reacted so lively for each polish dance that sometimes it was impossible to hear music.
And then came time to say goodbye – nice words of thanksgiving for the whole stay at the festival and “Wielkopolanie” have started their journey to Poland.
India is a country of wonderful, heart giving and hospitable people and even their culture and traditions are so different from polish “Wielkopolanie” felled in love with them. The greatest experience was the fact that their Indian friends let them to become real citizens of India.

Folk Group “Wielkopolanie” would like to thank sponsors for financial and material help, in particular Krobski Design company.