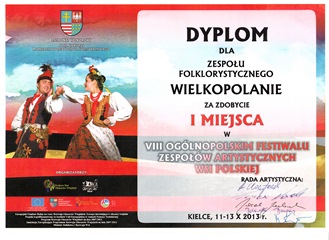 After 16 years break in October 2013 the 8th all-Poland Artistic Groups of Polish Country Festival took place in Kielce. Voivodeship Cultural Centre which was the organizer, introduced eleven folk groups from different regions of Poland. For three days in one place there was the occasion to watch traditional folk dances, musical instruments, colourful national costumes and listen to the song characteristic for different regions.

The aim of the festival is to foster the interest in folk culture, popularization of traditional folk dances, giving the folk groups the possibility to present their artistic achievements and registration and evidence of folk dances. The project is directed to dance folk grou

ps for grown-up person from Poland.

“Poznański Podkoziołek” – dances and games at the end of carnival presented by ancient inhabitants of countries of Poznań, current Poznań’s quarters and Bambry Poznańskie.

The program was accompanied by three authentic folk bands. They were playing on different traditional music instrum

ents like bagpipes, violin or clarinet and contrabass. The dancers of Wielkopolanie presented also the costumes characteristic for every region.

On Saturday, after two days of performances, the integration meeting “Na weselną nutę” took place in the seat of Voivodeship Cultural Centre. All groups presented wedding songs and dances characteristic for their regions. Everybody has the occasion to learn and collective dance. Over four hundred of artists has the possibility to have good time with the music from different regions of Poland played live and with people from other groups.

In the early morning on Sunday, the colourful parade of all groups in traditional, regional costumes went by the streets of Kielce finished in cathedral were there the ceremonial holy mass took place in the intention of the festival and its participants.

The second prizes were presented to Song and dance group of Górale Czadeccy “Pojana” and Regional group “Mogilanie”.

The laureates were awarded by memorial diplomas and prizes founded by Regional Secretariat of Krajowa Sieć Obszarów Wiejskich in Kielce.

The 8th all-Poland Artistic Groups of Polish Country Festival was the real folk feast, fulfilled with dance, music and songs.