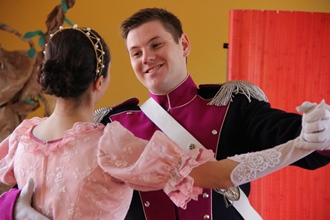 In 120 educational and cultural institutions, participants had the opportunity to admire the beauty of the costumes and folk dances. During their tours “Wielkopolanie” despite visiting the capital of Wielkopolska they have shown in outskirts:  Wagrowiec, Strykowo, Stęszew, Kamieniec, Murowana Goślina , Jeziorki, Słocina  and many other towns and villages of their region.

The educational tour, which took place in the December 2014 and April 2015 was  the year in which appear national dances like : ‘polonez’ and’ mazur’ and dances from the age of the Duchy of Warsaw including  ‘polka galopka’ and ‘polka mazurka’.

Children and adolescents also have the possibility to dance Polish national dance with the ‘Wielkopolanie’s’ dancers. The audience was extremely impressed by dance steps and  basic figures of ‘Polonez’, performing with assiduity.

Educational concerts in schools is the idea of allowing contact with the culture and art of the young and the youngest audience.  For many year “Wielkopolanie” go on tours to educate children and young people amongst the values of Polish culture, with particular emphasis on dance and folk music. These concerts are  complement to school programs connected with the wider understood  culture.