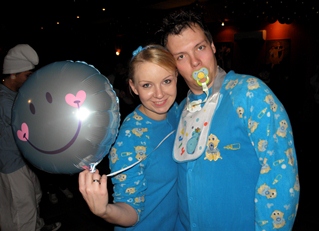 Andrew’s Children’s Ball. In the world of fairy tales and childish adventures enjoyed themselves former dancers, friends and supporters of the Group. Each of the participants of the event diversified his outfit with elements, that were reflecting past days of childhood, or referring to the fairy tales, that have viewed many, many years ago. Once again, the regular visitors of events organized by the Group did not disappoint, and the hall was packed. At the Ball arrived Maya the Bee, Superman, Smurfette, Indians, Fairies, Cats, Tigers, Mickey Mouse and other characters. Obviously there could not lack of traditional fortune tellings. At the specially designed corner of divinations, each participant of the event could find out, what surprises shall meet him in the coming year.

In addition numerous competitions were spervised by the dancers from the Group ‘Wielkopolanie’, associated with childhood, in which for the main award were competing with one another guests from all of the tables. Participants had to demonstrate an extremely wide knowledge of the characters from fairy tales, or had to sing a well known and loved children’s song. Among the many competitions challenge ‘race with an egg’ was for guests the most fun. All tables competed for the main award until dawn. The winners received a large basket of sweets. A surprise for the guests was also the choice of Miss and Mister of St. Andrew’s cellebration, where the primary standard, criterion for choice was an idea of outfit. The choice was not easy, because many people were dressed in uncommon, original and creative costumes. Following many discussions verdict was announced: won Smurfette and the Indian. During celebration there were also common festive songs and chants from the Group.
All guests in a cheerful and friendly atmosphere enjoyed themself till dawn.