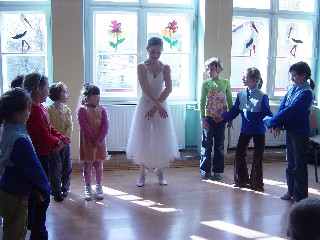 200 performances for children and young people were given by folk group “Wielkopolanie” during March and April 2009. Dancers of the group left on two concert tours presenting educational programs about the national dances and classical ballet visiting some two hundred towns and villages in Greater Poland. For both – the kindergarteners and the children or even adults “Wielkopolanie”  presented their artistic craftsmanship. On the first tour presenting five national dances, and on the second – basics of classical dance. For the youngest programs were presented in the form of fairy tales while for the more mature audience in the form of lectures. About  20 000 participants could see the concerts, and even try to dance with the dancers some simple dance steps. Children had most fun trying to dance Swan Lake.

Polish folk costumes charmed all the gathered. Costumes form Krakow, Kujawy, Łowicz regions and nobility suits with the extreme care prepared by the dancers were admired by the audience from the youngest to the oldest. The stage success of “Wielkopolanie” can be witnessed by hundreds of autographs and congratulations.

Already in October Folk Group “Wielkopolanie” will present themselves in the next educational concerts in our voivodeship.