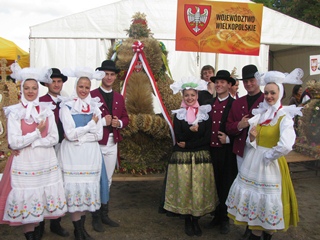 From 23rd to 25th September thousands of visitors from across Poland have visited Spała, to give thanks for this year’s harvest accompanied by presidential couple.

Among the representatives of all voivodships also Folkloristic Group “Wielkopolanie” has visited the grounds of Spała to show the all gathered guests the folklore from lands of Greater Poland.

Already in the early hours of Saturday morning “Wielkopolanie”, together with representatives of the National Museum of Agriculture and Agri-Food Industry in Szreniawa have made last corrections in harvest wreath, which was prepared by the museum, so that it could be proudly brought at the competition square.

Among the thousands of people in the afternoon, this wreath and wreaths from other voivodships has been rated by a jury composed of representatives of ethnographers and state authorities. The Group presented itself at the ceremony in costumes form around Krobia and Domachów (so called “stroje biskupiańskie”). Not only the ritual dances won the attention of all viewers, but most of all the costumes (starched bonnets and flanges) were loudly commented among the spectators, as well as the folk band composed of bagpipes and violins.

On Sunday the harvest festival in Spała, which is held since 1927, was graced by the presence of presidential couple – Anna and Bronislaw Komorowski. The first couple arrived over Pilica river before noon, laid flowers at the memory stone of president Ignacy Moscicki, met with representatives of the organizations in Spałą and passed Folk Artists Alley, which was one of the highlights of this year’s harvest festival. Just before the holy mass in the field chapel, president Komorowski gave the family of late Wincenty Witos the White Eagle Insignia, which have returned to his heirs after many years. After the solemn mass the presidential couple drove in a colorful parade from the center of Spała to COS. The parade was also attended by representatives of state and local authorities, as well as wreaths with groups from 16 Polish voivodships, which have, before entering a scene, presented wreaths prepared by themself and made of this year’s crops. The presidential couple has received from governors of harvest festival bread baked from this year’s grain harvest.

Harvest wreath and Folkloristic Group “Wielkopolanie” was admired by many important guests, who arrived at the stadium. Among them was present marshal of Greater Poland, Mr. Marek Wozniak and Mr. Piotr Florek, the voivod of Greater Poland voivodship.

At the same time in the center of Spała crowds of people visited presentation of all voivodships and institutions related to agriculture. Very successful were regional delicacies served at the stands, and folk crafts imported from various parts of Poland.