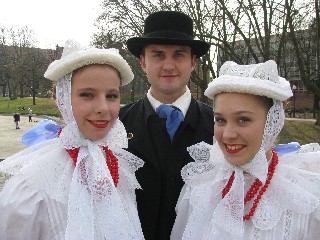 ań’s countryside were made in 1981. Mrs. Franciszka Kazimierczak and Mr. Maria Wiatrowska were carrying a banner during celebrations of Corpus Cristi that year for the last time.
After almost 30 years dancers of Folk Group “Wielkopolanie” for the first time have presented traditional clothes from Poznań’s countryside on streets of city.

Works over the reconstruction of the dresses took few years. It has started from taking consultations with dr Zofia Grodecka who was making researches for traditional dresses of Bambry

and Poznań’s countryside and in 1986 she published a book “Traditional dresses in historical and contemporary times of Poznań”.
An enormous support in all works gave Ethnological Museum which allowed for photo session of elements of costumes which they owe. Once having old photos and book illustrations next step was to make an reconstruction of the clothes under the control of costumes connoisseur. Folk handcraft makers were preparing female

s jackets, skirts, aprons, decorations and male dresses. The most time-taking was searching and bringing textiles like tulle (that one was ordered in USA). Only to make the decorations it took two years.

This way after few years “Wielkopolanie” can present themselves in brand new costumes which will remind of Poznań’s history that was already forgotten by many.

At the moment Group is working over dances and music for Poznań’s folklore. Consultations are leaded by prof. Mirosława Bobrowska – ethno choreograph, outstanding connoisseur of polish folklore with specialization for Great Poland folklore and CIOFF expert for polish section.
Dancers are improving their skills for równe, okrągłe, wiwaty and many more to present them in front of audiences of Poland and abroad.
Let us make old dances and songs revive…