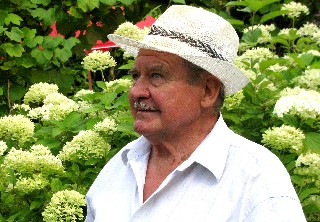 From 1965 to 1983 Wacław Wróblewski was an artistic director of Folk Group “Wielkopolanie” which on that time was named Regional Folk Group “Cepelia-Poznań”.

There have met Barbara Florek – Group’s accompanist, Piotr Kulka – manager of “Wielkopolanie” and as well Krystyna i Włodzimierz Scholz – one of the first pair of dancers.

Mr. Wróblewski become a artistic director in 1965, just after first tourney to Sweden (at that time in the leadership of Mr. Roman Matysiak). He to appointed Mr. Jerzy Dabert to a post music director, and Mrs. Barbara Florek to a post of a accompanist. Dancers were students of Spółdzielnia Pracy Rękodzieła Artystycznego „Rytosztuka” and Spółdzielnia „Rzeźba i Stolarstwo Artystyczne” and that was their obligation, recalled Mr. Scholz.

In spite of hard times that Poland suffered on that time, group was participating in many prestigious events in Poland and seventeen times they crossed the borders of our country. One of the best remembered of the tours was the one to ZSRR where besides of numerous presentations they was obliged to submit laurels. But the most attractive as for that time was tourney to USA and Canada.

The main repertoire of the Group during leadership of Mr. Wróblewski were polish national dances and the ones from Wielkopolska Region in the citys of Szamotuły, Gostyń and Kościan.

During the meeting there was recalled as well wedding of five pairs of dancers of a Group that took place in 1970 at the Main Square of Poznań. That day forever love sword Andrzej Gryczka i Iwona Jarmark, Zdzisław Pawlak i Celina Woźna, Zbigniew Smyk i Grażyna Wojcieszek, Krzysztof Kluskowski i Jolanta Hryniewiecka, Jerzy Tomkowiak i Ewa Fokt.

„I am the history of this Group” – claims Mr. Wróblewski.

At the moment Mr. Wacław is working with sightless people and he’s the one who invented methods to teach them how to dance. For his work he was decorated with medal of Towarzystwo Hipolita Cegielskiego Labor Omnica Vincit.