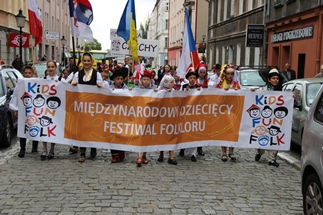 This year there were about 300 young, talented artists from various parts of the world that took part in this holiday of dance and music. We hosted dance groups from Turkey, Ukraine, Serbia and Czech Republic in Poznań this year. What is more, it was the first time when it was possible to see almost all children folk groups from Poznań, i.e. Zespół Folklorystyczny „Poligrodzianie”, Zespół Pieśni i Tańca „Łaniki”, Dziecięcy Zespół Tańca Ludowego „Mała Wielkopolska” and very dear to our group Wielkopolanie – Dziecięcy Zespół Folklorystyczny „Cepelia-Poznań”, the co-organizer of the festival.

Festival was held under the auspices of  Marszałek Województwa Wielkopolskiego Marek Woźniak, President of  Poznań Jacek Jackowiak and Wielkopolski Kurator Oświaty Elżbieta Walkowiak. The participants of the festival performed not only on the stage of Jarmark Świętojański in the Old Market but also in Pobiedziska, in primary schools in Jerzykowo, Swarzędz, Pobiedziska, Tulce and Poznań.

This year a festival town was built by the Malta lake. On the Saturday afternoon inhabitants of Poznań could admire an exhibition of folk costumes, participate in workshops of traditional folklore handicraft, go to mini-zoo, buy hand-made products, get to know games and dances from various parts of the world. Winners of the II Wojewódzki Konkurs Plastyczny „Dziecko w folklorze świata” were awarded on a stage surrounded by an exhibition of awarded and featured artworks.

Many fans of folklore and inhabitants of the Greater Poland showed up for all events of KIDS FUN FOLK FESTIVAL. It was a perfect opportunity especially for families with children to spend their free time nicely.

Following the pattern of recent years, dancers of Zespół Folklorystyczy Wielkopolanie actively contributed to the organization of the festival. Some of them worked as guides, translators or as a technical team. There were also many volunteers that helped during all events.

Organizers severely appreciate involvement and the extensive work that Wielkopolanie have carried out.

6th edition of KIDS FUN FOLK FESTIVAL is behind us. We are looking forward to another edition next year!