IT IS THE ONLY ONE NIGHT 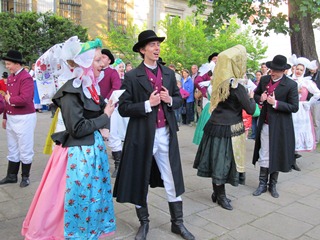 On 18th of May 2013 polish museums opened their doors, for the whole night to be able to visit not shown in usual days exhibits. Nearly 150 cities in Poland celebrated the Night of Museums giving a wonderful experience to adults, teenagers and even children.

Their doors for visitors opened

e Gallery, Museum of Ethnography and many many more.

Folk Dance Group „Wielkopolanie” during this Night of Museums presented in two Museums in Poznań. The doors for polish folklore opened Museum of Etnography and Bambers Museum. Poznan artists presented to the large audience folkl

ore from Krobia and Domachów and dances and songs from Łowicz.

Both of Museums opened for visitors inaccessiblecorners. Visitors took a walkinto the past revealingthe secrets offolk art material and immaterial, enjoyed the specially prepared for the occasion the exhibitions and demonstrations.

11th Museum’s Night in Poznan again attracted thousands of residents of the city and region. The idea was to show the lost and gained works, meanings and ideas, which have been destroyed or forgotten but because of the efforts and hard work are often able to restore the memory of them – “lost”

And the aim has been achieved..