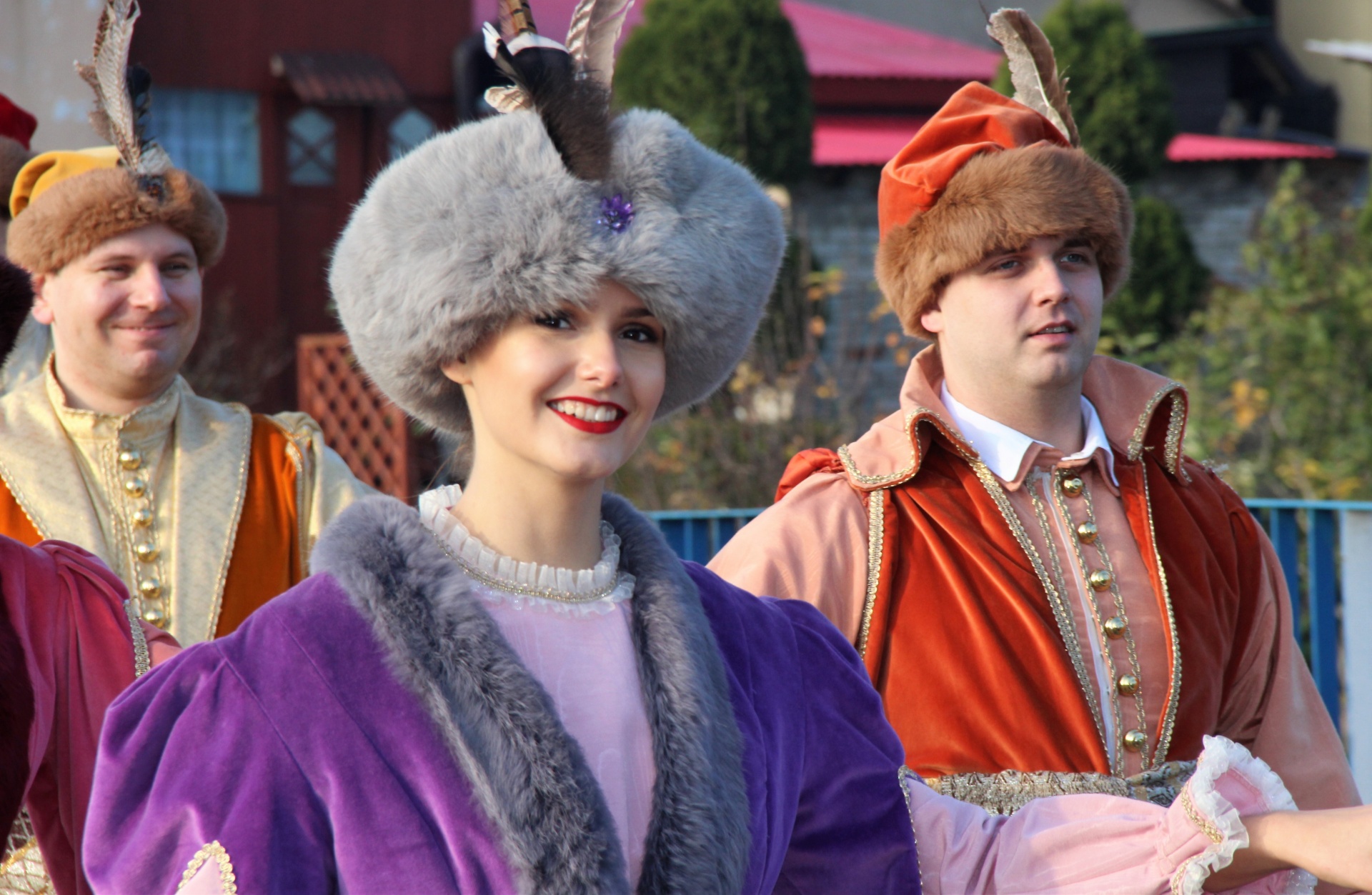 Independence Day is the most important Polish national holiday connected with the regaining of independence in 1918 after 123 years of partitions. Folkloristic Group “Wielkopolanie” with five concerts celebrated the 100th anniversary of this event.
On November 10, he graced with his performances the 14th Poznań Independence Ball organized under the patronage of his Magnificence Rector of the University of Adam Mickiewicz in Poznan, professor Andrzej Lesicki. Among the guests present there were rectors and professors from Poznań’s universities, town authorities, as well as numerous residents of Poznań. In the beautiful scenery of the Collegium Maius hall, after greeting the guests on the stage, dancers and musicians of the Folkloristic Ensemble “Wielkopolanie” entertained. In the noblemen’s picture “I’ll take it to you,” they presented the gathered polonaise, krakowiak and mazur, and then danced with the guests, according to tradition, a polonaise led by the Rector of the University. A. Mickiewicz prof. Andrzej Lesicki with his wife and then the waltz. “Wielkopolanie” also prepared a cheers for all arriving in Wielkopolska. After the stage presentation, they invited the guests and together they danced the dances characteristic of their region under the watchful eye of the leader. For the ball participants, the organizers also prepared a chat “Wielkopolska Mainland” about Wielkopolska from 100 years ago delivered by prof. Waldemar Łazuga from the Historical Department of the Adam Mickiewicz University, works by Chopin and Paderewski played on the piano by Justyna Wróblewska from the Poznań Academy of Music and many other attractions that delighted the participants of the ball.
On November 11, the Folkloristic Group “Wielkopolanie” participated in the concert on the occasion of the 100th anniversary of the Independence Regain organized by the Communal Cultural Center in Łekno. The ceremonial celebrations began with the laying of flowers under a commemorative plaque commemorating the participants of the Greater Poland Uprising: commander A. Czarnecki and initially 20, and currently 22 other insurgents. Then in the church. St. Ap. Peter and Paul held a solemn Mass. in the intention of the homeland, after which the “Wielkopolanie” with a traditional polonaise led all participants to the Sports Hall, where the main celebrations were held. After the official greeting by the Mayor of Wągrowiec Commune, Przemysław Majchrzak, “Wielkopolanie” appeared on the stage presenting Polish national and regional dances from around Spisz, Rozbark, Bytom and the folklore of Eastern Cracovians. Between the artistic program of Poznań artists on the stage, the Folkloristic Group “Pałuckie Smyki” danced, participant of the “EtnoPałuki” workshops run by Piotr Kulka. At the end of their presentations, the two groups jointly performed the national krakowiak, thunderously applauded by the large audience. For the guests, the organizers also prepared performances of the students of the Primary School and an exhibition of works made as part of the EtnoPałuki project.
On the same day, the Folkloristic Group “Wielkopolanie” presented itself during an occasional concert on the occasion of the 100th anniversary of the regaining of Niepodległości in Kostrzyn -Poland. After the ceremonial opening by the Mayor of the Commune, artists from Wielkopolska appeared on the stage. In a special independence program together with the artists from Poznań theaters “Wielkopolanie” showed the beauty of national and regional dances from the vicinity of Rzeszów, Przeworsk, Spisz and others.
November 11 is also the Poznań St. Martin street festival, organized since 1994, referring to the tradition of St. Martin’s croissants. The event is changing from year to year, but there are several recognizable elements in its program: first of all: procession with Saint Martin dressed as Roman legionnaire, who is surrounded by stilt-walkers, musicians, machines and platforms (in total, in the parade every year takes part a few hundred people!). travels the main street of our city. For the next year in a row, the dancer from the Folkloristic Group “Wielkopolanie” participated in the procession, who on the platform imitating the dresses of Poznanian Bamberka greeted the thousands of spectators passing through the street St. Marcin. After the parade ended, the President of the City of Poznań gave Saint. Marcin’s key to the city gates, which signaled the start of a joyful celebration, the finale of which was a firework display.
On November 13, the Folkloristic Group “Wielkopolanie” continued concerts related to the regaining of Niepodległości by Poland. This time he came to the Iskierki Kindergarten in Skórzew, where together with musicians and singers they presented the youngest national and Greater Poland culture. Seven groups of preschoolers had the opportunity to listen to polonaises, mazurów, patriotic songs, as well as see Wielkopolska traditions presented to the sounds of a wedding goat.
PK 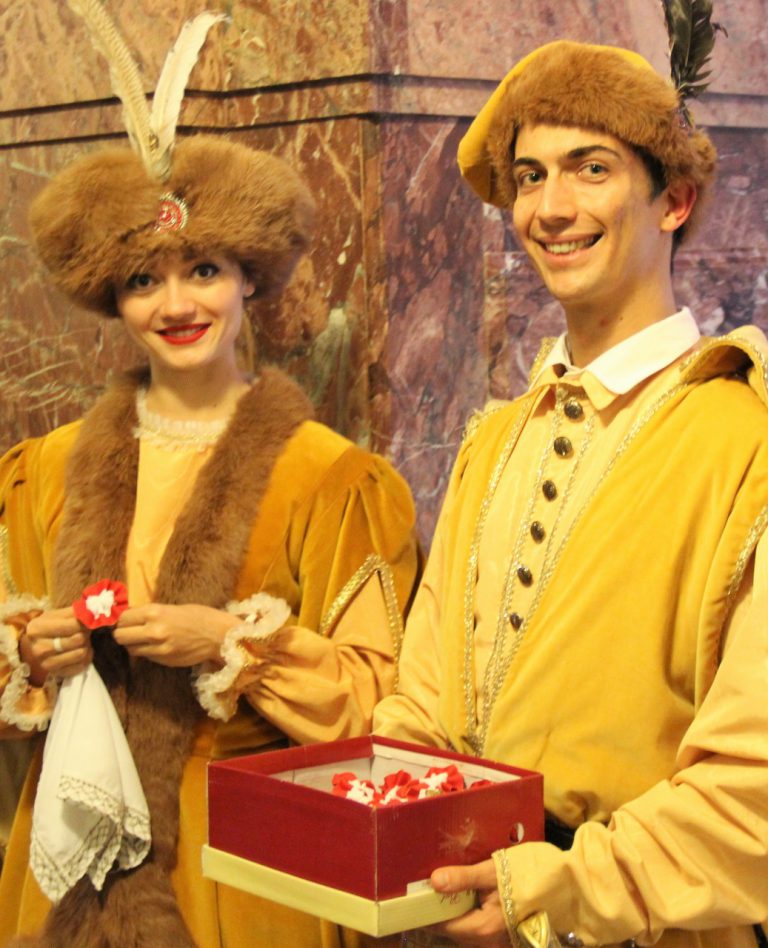 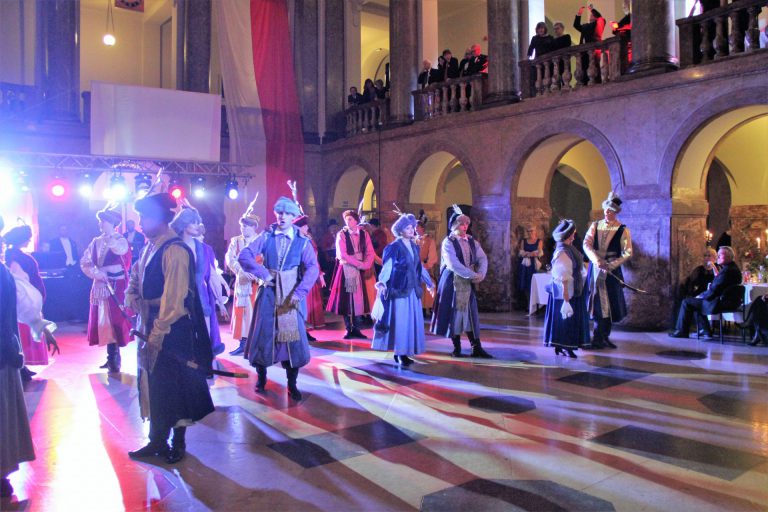 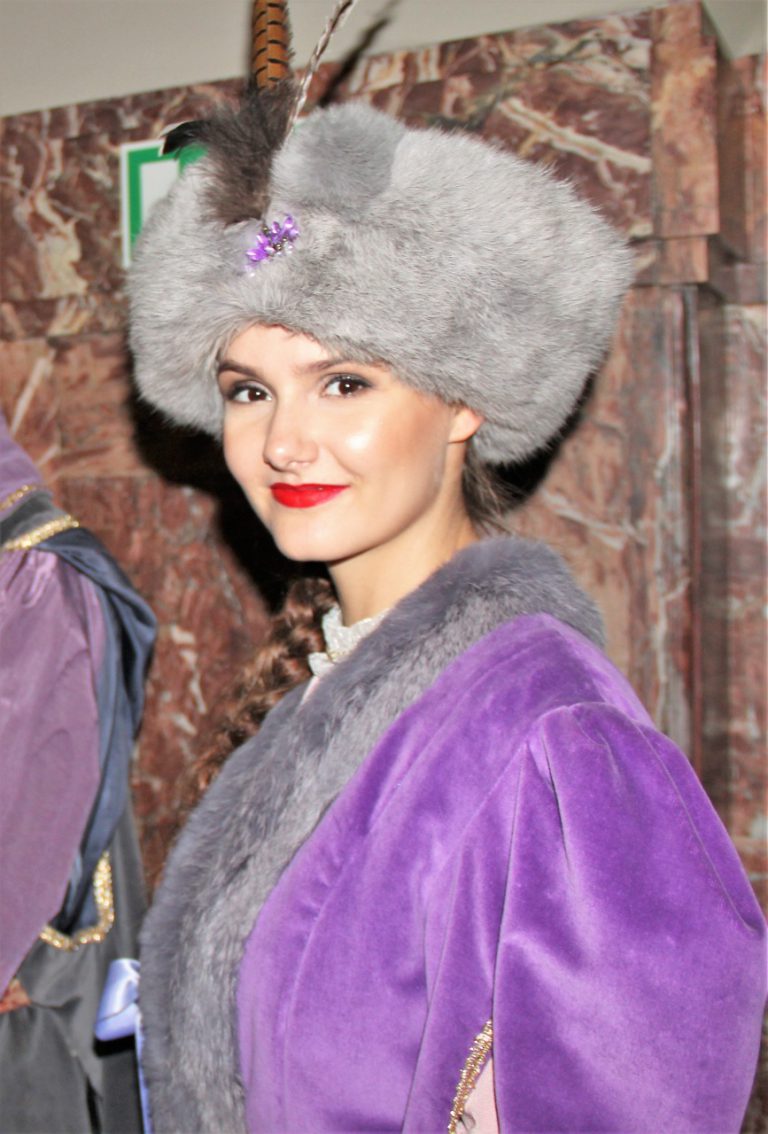 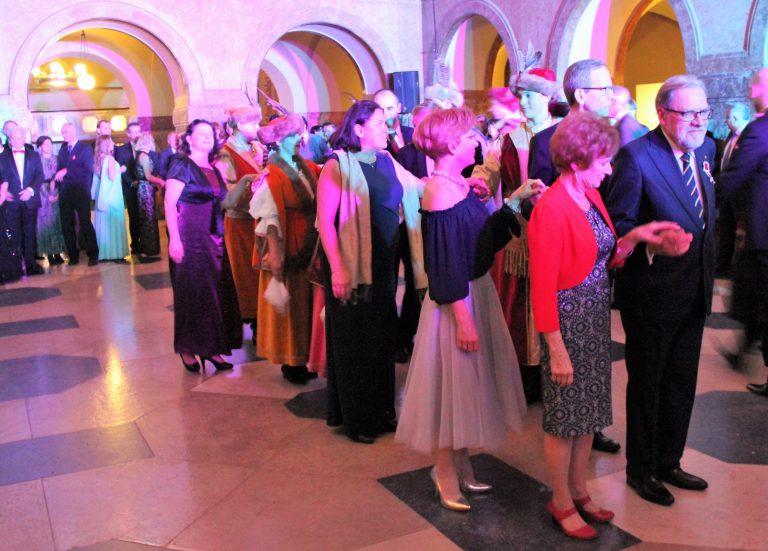 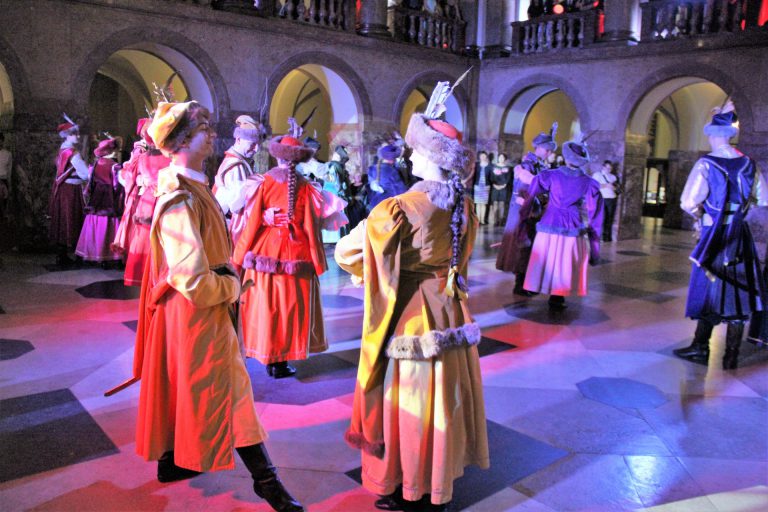 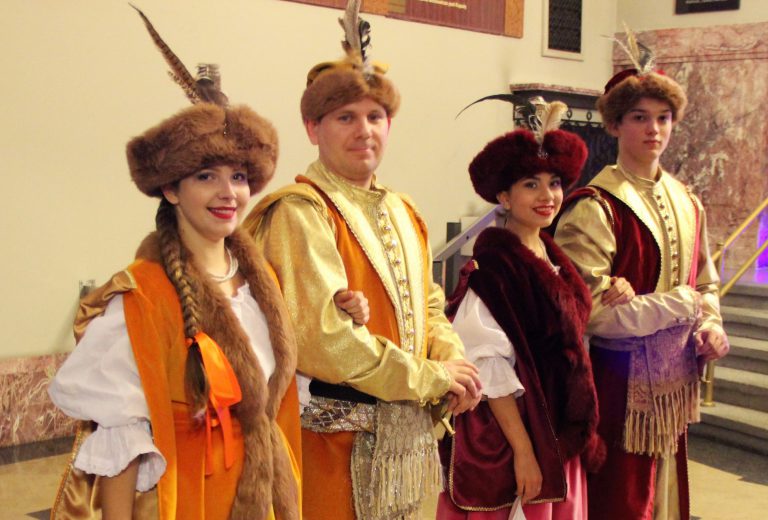 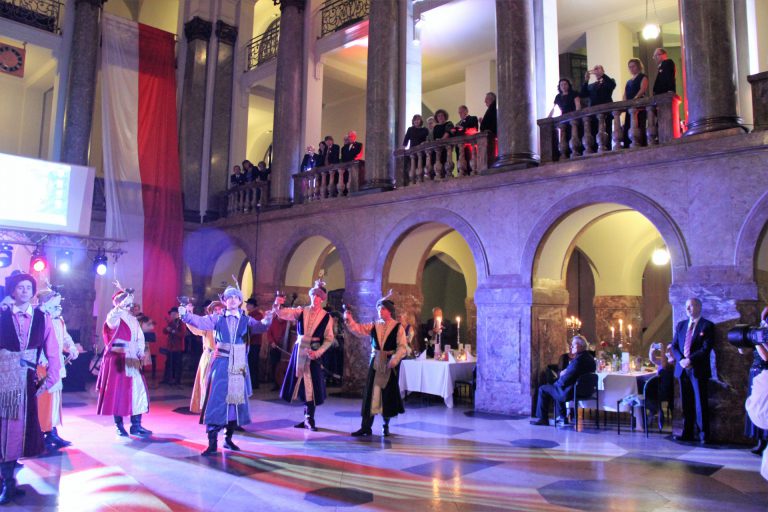 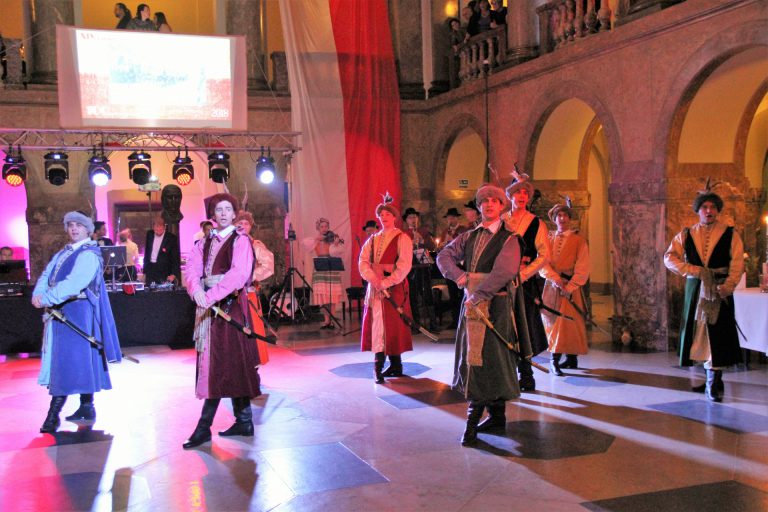 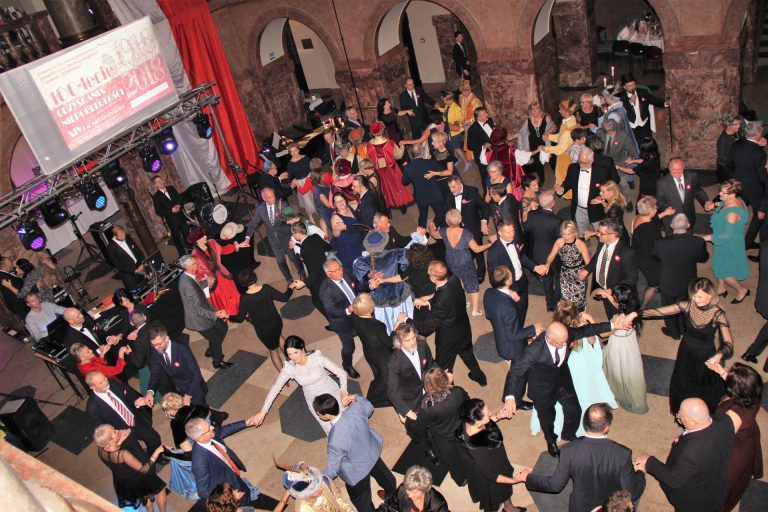 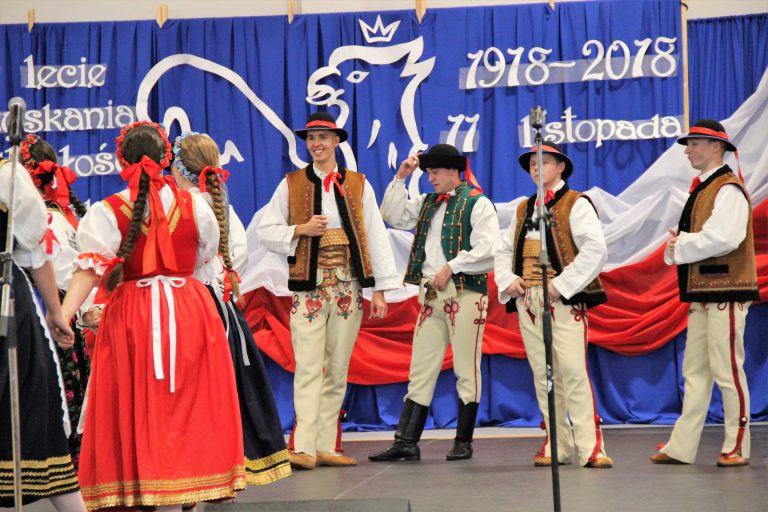 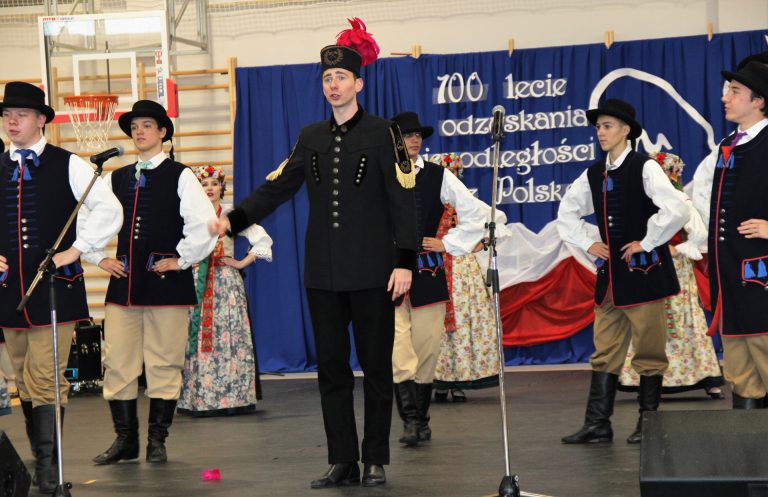 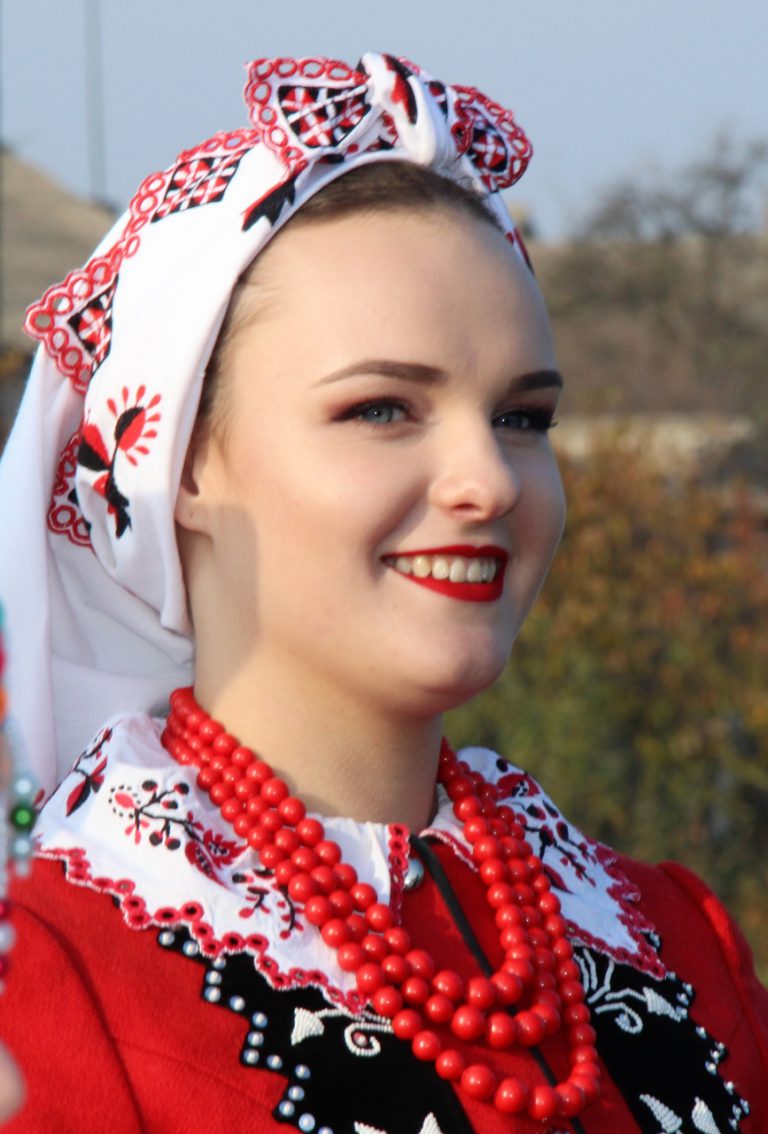 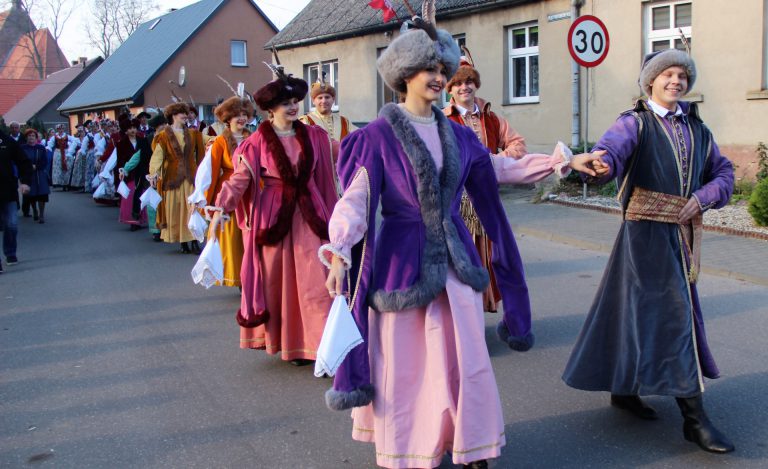 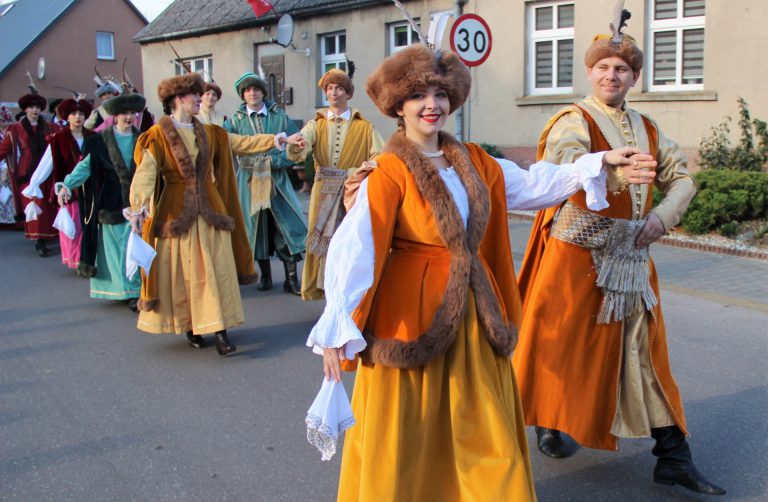 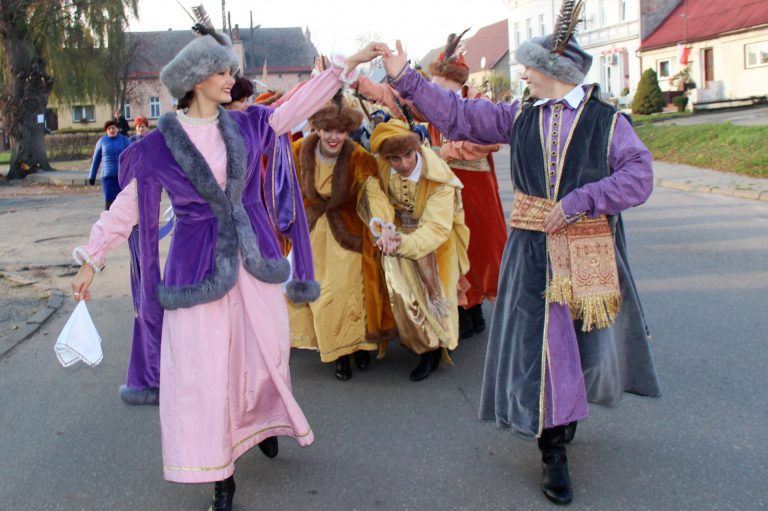 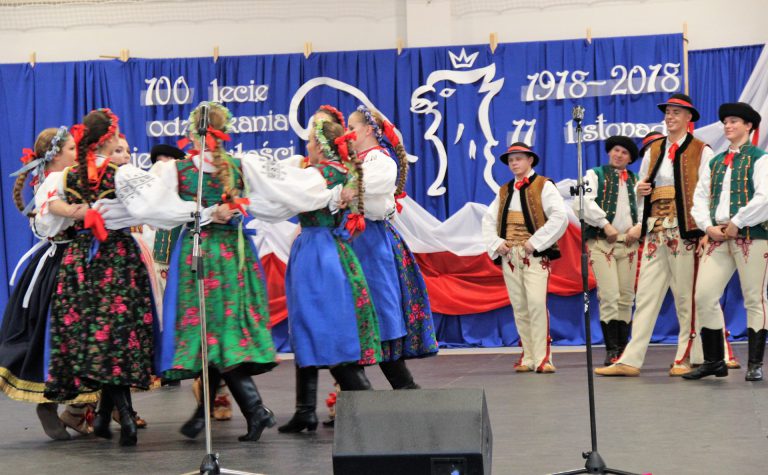 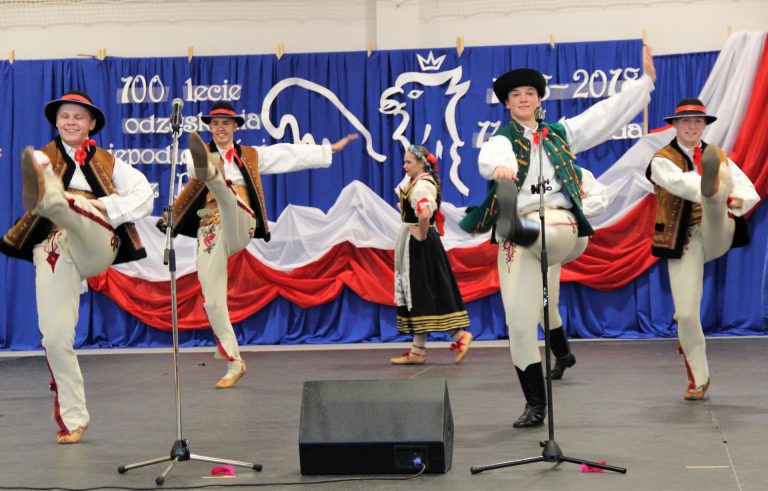 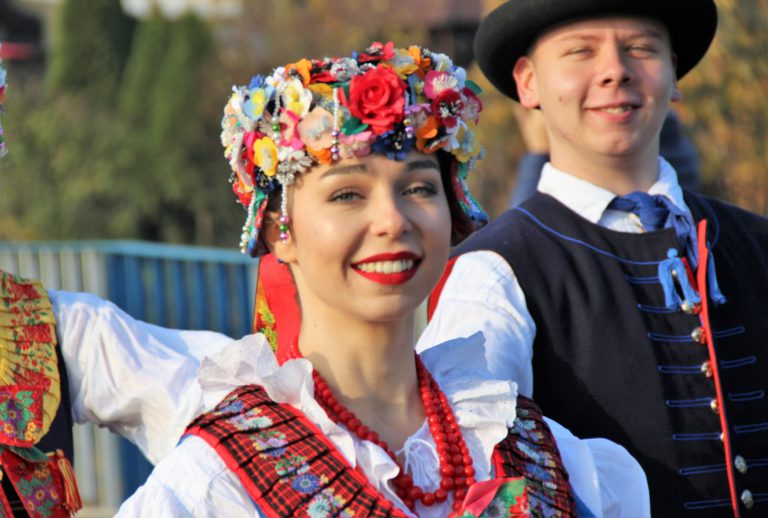 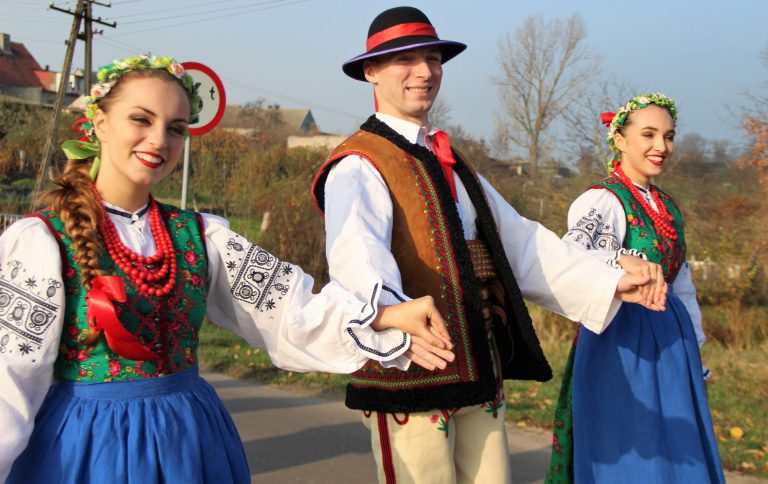 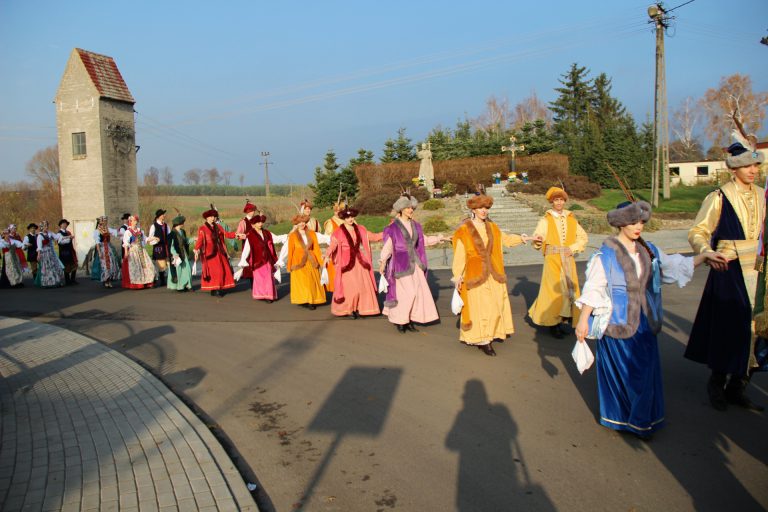 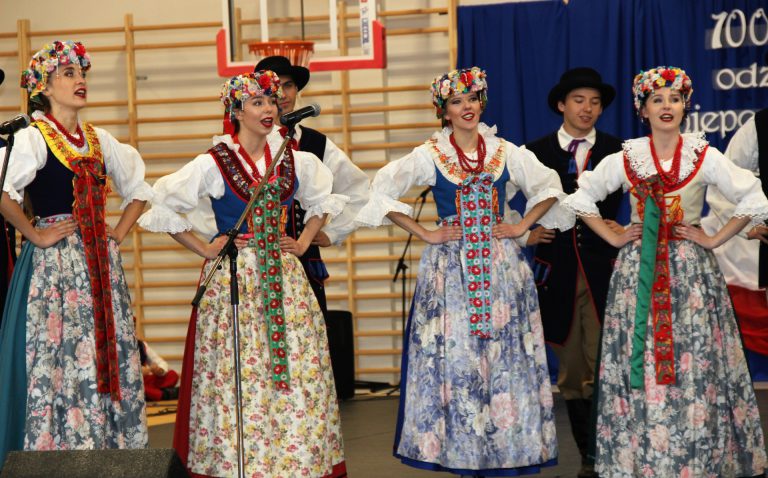 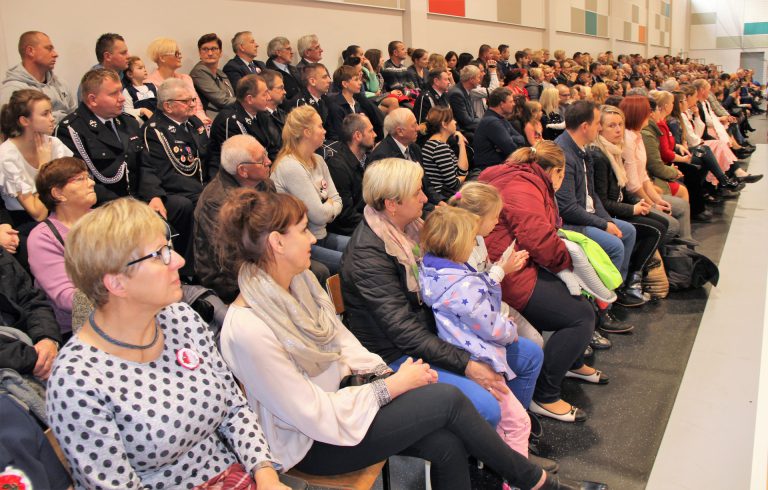 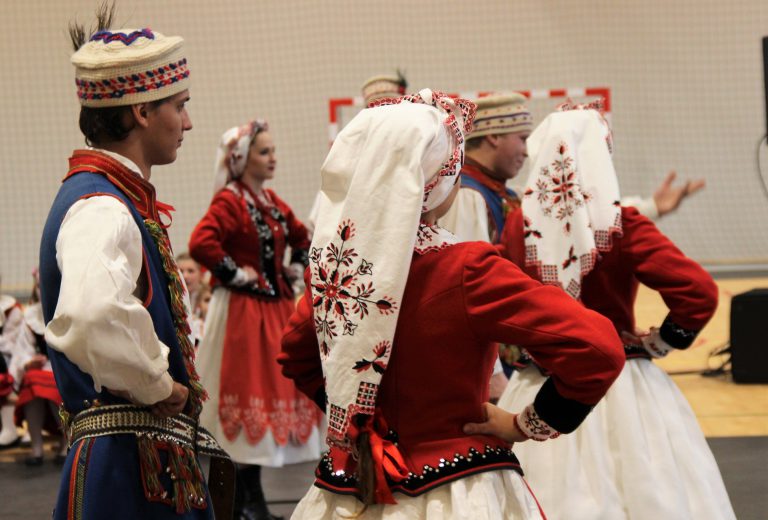 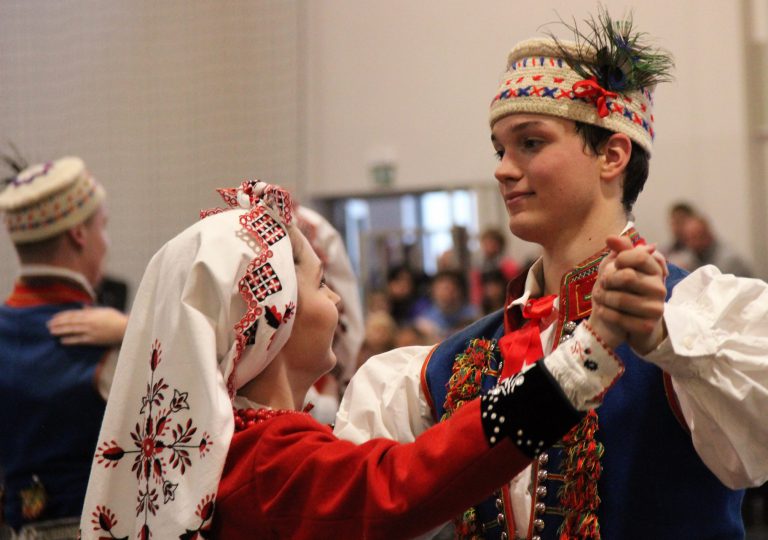 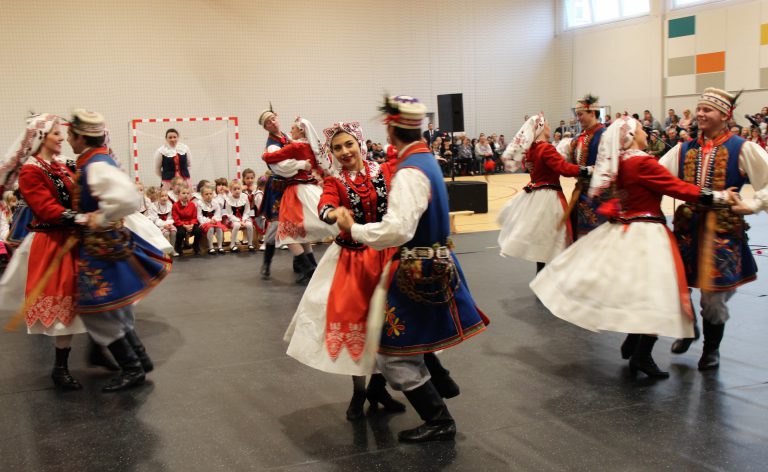 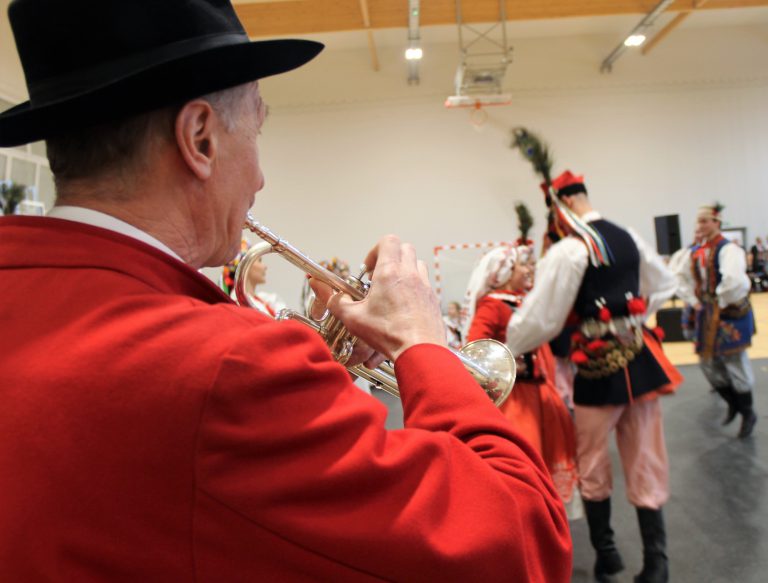 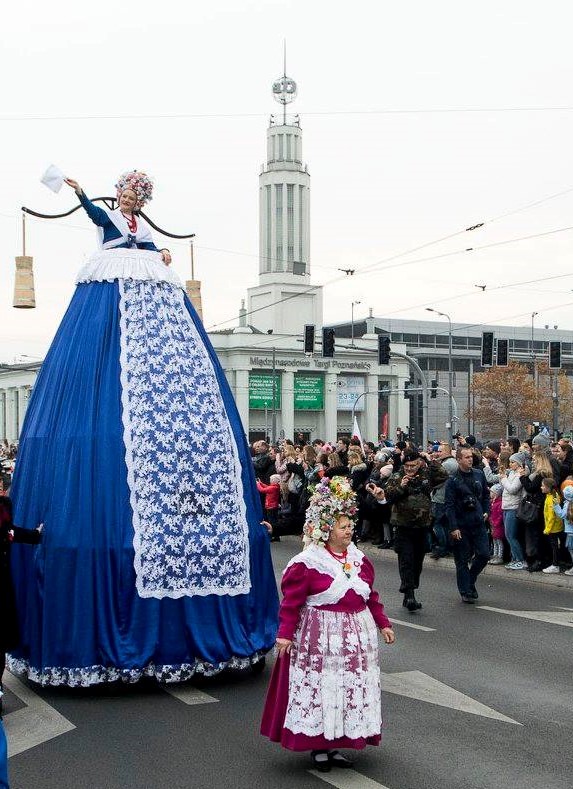 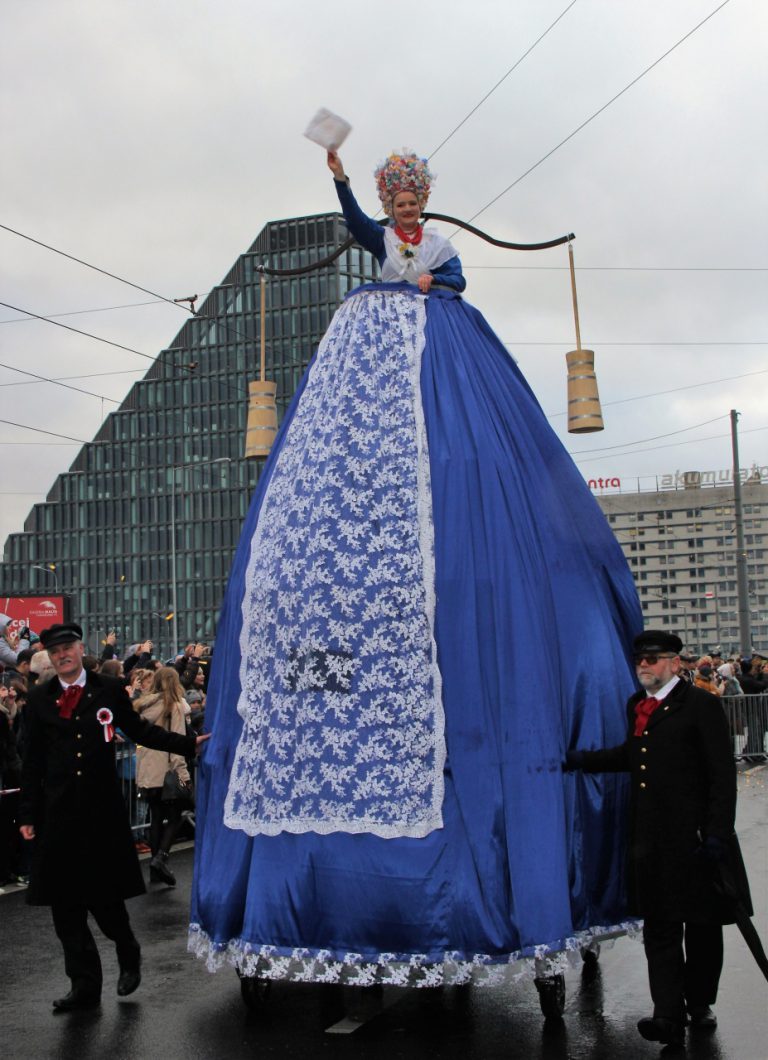