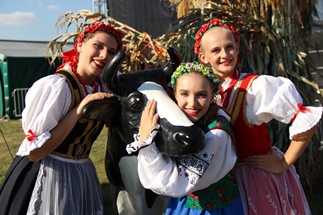 Procession beginning the fest formed in front of Recollection House. The representatives of all the parishes carrying their festival wreaths and accompanied by Folkloristic Group “Wielkopolanie” formed colorful, singing parade and passed through the ornamented homesteads.

After reaching the stadium through the colorful column formed by members of “WIelkopolanie”, the High 17 towns took part in District Harvest Festival in Rościnno which took place on August 29th. The Mass led by local parson Sławomir Komorowski took palce.

The ceremony was preceded by presentation of festival wreaths prepared by all the participating villages. Traditional harvest ceremony presented by Folkloristic Group “Wielkopolanie” was applauded loudly by the audience. The loaf of bread prepared from this-year crops was passed Tadeusz Kłos – mayor of Skoki by young prefects of Rościnno: Sandra Szymaś and Patryk Loręcki.

The tradition of the harvest festival in Skoki is to organize the Village Tournament. It is notice worth that whole route from Skoki to Rościnno was ornamented with very impressing decorations made of hay and crops.

The day later Folkloristic Group “Wielkopolanie” presented itself during Commune-District Harvest Festival in Książ Wielkopolski. The celebration began with the Holy Mass concelebrated by priests Andrzej Dolski from St. Nicolaus parish in Książ and Marian Brucki form Parsonage in Śrem. After the Mass a parade led by Folkloristic Group “Wielkopolanie” and the orchestra went to the amphitheater – it was occasion for presentation of historical and contemporary agricultural machines.

After festival singing of the national anthem, the invited guests and all the participants were greeted by the hosts: prefect of Śrem Zenon Jahns and mayor of Książ Wielkopolski Teofil Marciniak. In their speeches, highlighting the long history of polish agriculture, they acknowledged to farmers, gardeners, orchardists and apiarists for their hardship, sacrifice and hard work, so that we do not run out of the daily bread.

The care of artistic side was taken by Folkloristic Group “Wielkopolanie” which presentations frequently referred to culture and tradition related to the festival of harvest. therefore there could not have missed the festival dance of the prefects around the wreaths. This honorable role was given this year to Rozalia Jarmuszkiewicz of Sroczewo and Tomasz Adamczak of Zakrzewice. They also passed the festival loaf of bread to prefect Jahns and mayor Marciniak, who divided it among the gathered guests and other participants. “Wielkopolanie” presented a one-hour performance consisting of dances of many polish regions as Wielkopolska, Rzeszów, Przeworsk, Bytom, Rozbark and others.

On September 6th Folkloristic Group “Wielkopolanie” presented its artistry during XXXVI Michałowskie Fair and Commune Harvest Festival in Mieścisko. The celebration traditionally began with the Holy Mass, after which the colorful parade went to the local stadium where it was continued. The village-mayor greeted the invited guests and the citizens, especially farmers, summed up the harvest and acknowledged to the farmers.

Then there took place the festival acknowledgement to “Wielkopolanie” Group for frequent illustration of the celebration for many years – the manager Piotr Kulka was given the memorial plate. next the harvest ceremony was presented by “Sarbinianie” Ensemble followed by the performance of Folkloristic Group “Wielkopolanie” which presented polish national dances and folklore of Rozbark, Bytom and Spisz regions.

“Wielkopolanie” would like to acknowledge to the Organizers for invitations for this-year Harvest Festivals in the region.