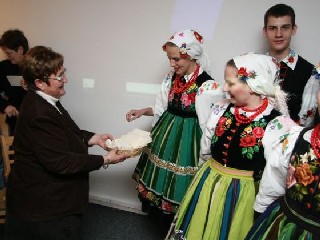 Christmas, celebrated since the fourth century, shaped the folk customs and religious rituals over the centuries. Some of them
gradually disappeared, other have survived to our time in the form of residual or enriched. Traditions and behaviors of pagans and christians have mixed, in addition all nations
make them special by adding own piece of culture, giving the specific content. Christmas is a beautiful custom of singing Christmas carols. Carol accompanied the

Poles everywhere for centuries. The whole of Poland has been singing carols for ages. It is a living monument of past ages, a legacy of which we connected with them,
friendly to its simplicity and his characteristic humor, is an expression of noble sentiments. It is both ecclesiastical and secular song, to sing in the church and at home.
In december of that year “Wielkopolanie” four times sang carols and pastorlas, which are in repertoire. December 16th, was held Christmas Eve prepared by Folk
Group “Wielkopolanie”. Dancers sang carols and pastorals from almost the entire country by spending the evening with them friends and former dancers. By candlelight
there was not forgotten about those most in need. Like last year, “Wielkopolanie” gathered gifts for little Ada Wnuk, who is suffer from SMA1.
December 17th,  “Wielkopolanie” presented at the christmas, artistic program in Provincial Public Library and Culture Animation Center in Poznań. In the same day
evening, “Wielkopolanie” appeared in the Działyński Palace in Poznań, during the “Działyńscy Vigil”. December 18th, “Wielkopolanie” sang on the Kreisel company’s Vigil.

But this is not the end of the carols and pastorals concerts performed by “WIelkopolanie”. January 31st, our “artists of Poznań” will present themselves to the people of our region, in St. Casimir Church in Gułtowy.

“Wielkopolanie” are currently preparing a new artistic program, which will present in Malta during the International Folklore
Festival, which will be held from 27.12-03.01.2010. Malta would be the 46th country in the world, visited by “Wielkopolanie”, where dancers will present folklore from Polish regions.
PK tł WO