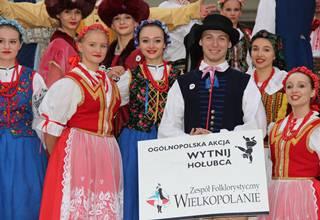 Action “Cutting Hołubiec” began in 2010 with the initiative of the Warsaw folk groups and had local range, and within four years enveloped the entire Polish.

Singing and dancing young people encourage passers-by to common cutting hołubiec – the most popular step folk in Poland and many European countries.

During the action participants across the country also undertook a joint record breaking attempt at cutting the well-known step (in Poznań Old Market Square at 5 p.m.)

The Organizers of that action, want to show the beauty of native traditions, costume, singing and dancing so folk culture, which is part of the Polish national culture.