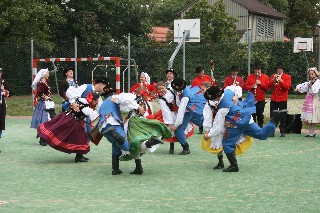 The first mention of the village Górczyn appear in the documents of the thirteenth century.
The village belonged to the Wielkopolska’s princes. At the turn of the thirteenth and fourteenth century, began a process of transition to the jurisdiction of Poznan, ended after a number of processes in 1609. During this period the village was a farm. After the wars and epidemics that struck Wielkopolska in the seventeenth and eighteenth centuries, in the years 1750-1753 Poznan authorities brought to the village settlers from the vicinity of Bamberg – Bambers ancestors. Residents of Górczyn as one of the few, under the leadership of theirs mayor, Macieja Palacza, took part in the uprising in 1846. After the lifting of the Fortress of Poznan, in 1900 the village has been incorporated into Poznan. A different ethnic group, which were Bambers, had a different language than the surrounding Polish. He was the first major barrier, both in their mutual relations, in relations with the city authorities, as well as in participation in the life of the Church and religious practices. As a deeply religious people they wanted to attend church, and every village had its own parish. In all,  the sermons were preached and the sacraments were given in Polish. Church, religious community, was th

e first, the most rapid polonization area for Bambers.
The second factor that contributed to the assimilation the group of Bambergs with the Polish community, was a school. Initially, children were taught all subjects in German. But over the years under the influence of teacher-priests, religious education was introduced in the Polish language, and soon the Polish language, which was consistent with the intentions of Bambers. In the process of polonization, important were relationships with the Poles. Gradually began to assert to mixed marriages. Descendants of settlers from Bamberg increasingly were identified with the Polish people.
Researches of the problems of the national minorities have recognized this fact as “the polonization miracle” and the rapid fusion of on national group to another as a unique in the history. Bambrzy and their descendants have brought to the culture of the Poznan’s villages, the new elements in the field of agriculture, food, construction, although they were not totally alien to the Polish population due to its long-term contacts with the cultur

e of western neighbors. In the years 1900 to 1924, the surrounding villages, including Górczyn, were incorporated into the city and they became the districts. The descendants of settlers from Bamberg during decades are an integral part of the population of Poznan.

After 110 years of incorporating Górczyn into Poznan, Folk Group “Wielkopolanie” honored the celebration with their dances. In addition to the repertoire of dances from Wielkopolska, there were also dances and chants of Upper Silesia, Rzeszow, Krakowiaków Zachodnich, Łowicza and the National Krakowiak with the Zwierzyniecki horse. Górczyn citizens who came to the jubilee celebrations, also had the opportunity to dance together with the dancers and to learn cheers and other dances of Wielkopolska.