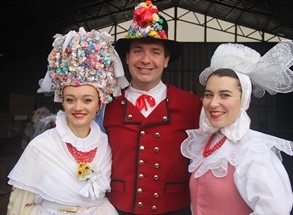 On 31st of August, the XVI Provincial-Archdiocesan Wielkopolska’s Harvest Festival took place in Słonawy, near to Oborniki. The co-hosts of it were Marek Woźniak – the Marshal of Wielkopolska Province and Tomasz Srama – Mayor of Oborniki.

After a holy mass, conducted by His Eminence Bishop Zdzisław Fortuniak, Marek Woźniak – The Marshal of Wielkopolska Province, thanked the farmers for their hard work and bread, which would be enough for us for the rest of year, because of

He also referred to a bygone UE financial perspective, which were well used by farmers in our region. Moreover, he distinguished this year’s foremen of harvesting festival – Małgorzata Najdek and Karol Kowalski, who successfully used the funds of rural development programs.

After his speech, the rope, made of the ears of grain grown this year, was cut by stickle by Marshal of Wielkopolska Province. It was a signal to start a harvesting rite.

elkopolanie” appeared on the stage. They’ve presented costiumes of many different subregions of Wielkopolska. Among the wiwat’s, przodek’s, lender’s or okrągły’s (name of dances) the artists sang a traditional rite songs, associated with harvesting festival. After dancing with the foremen, Marshal of Wielkopolska Province appeared on the stage in the company of Bamberki from Poznań. As tradition, the bread, which was baked of the grain harvested this year, was given from Forewoman to the host of harvest festival. This bread was divided among guests and many many arrived inhabitants of the region. The competition “The prettiest harvesting festival wreath” also took place. The first prize, funded by Marshal of Wielkopolska, went to Piła Region.