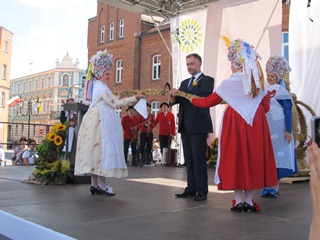 eautiful polish folk traditionn. It is also time to thank God and everybody who handles the hardness of takinf care of Wielkopolska’s plantations.” Those are words of Marek Woźniak the marshal of Wielkopolska province.

This year’s host of the XV harvesting festival was Środa Wielkopolska. Celebrations were started with the opening of a new agricultural exhibition, which was held by Krzystof Grabowski member of the Wielkopolska’s provincion management. Exhibition contained four dep

n. There were also groceries, presentations about institutions and organisations connected with agriculture. Like every year, there had place a competition for the best exhibition stand.

Later, there took place a harvesting rite executed by Folkloristic Group Wielkopolanie. Dancers presented following costumes: Bambrzy from Poznań, Biskupianie, costumes from Szamotuły region and from Dąbrówka Wielkopolska. Dances made it possible for audience to get familiar with the tradition of harvestinf rite and the way of living of people from villages in the past.

After official dancing around the wreath- the symbol of wellfare, dancers invited harvesting festival foremen Mrs. Agata Stępa and Mr. Józef Korczyk onto the stage. They presented their dancing abilities in front of the audience, while dancing with artists

At the end of the rite Wielkopolanie presented the folklore of Poznań’s habitants from the past.

The organizers were: marshal of Wielkopolska province.