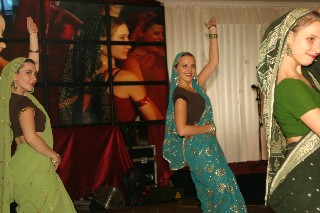 er than polish folk, based on the culture of regions and countries visited by the group dominated.
The whole concert was divided into four thematic parts. The first one started with the dance based on the traditional Jordan men wedding dance. After this the proper theme of this part – India started. Dancers presented the dance of girls in original Indian sari clothes, dance of boys from Punjab region. S

oloist Hania Jaworska presented by herself prepared sanson ki mala pe arrangement. The entire show was supplemented by the dance based on the movie scene from the Bollywood hit “Sometimes Happiness, Sometimes Sorrow”.

The leitmotiv of the second part were Near and Far East. After the hard introduction played by men on Japanese drums, there came the Taiwanese female warriors with their fast, impulsive dance. This scene was closed by the entrance of traditional Chinese dragon. Then the climate changed in typical Arabic. Invited guests were surprised

first by invasion and battle of desert warriors and after by the tempting dancers disguised by the beautiful butterflies and performing the sensuous belly dance.

The third part was comprised by the dances from the region

s definitely closer to Poland. Dancers delighted the audience with the acrobatic Ukrainian dances, after whom the stage was controlled by the colorful clothed, telling people’s fortune Gypsy people.

In the last part Wielkopolanie presented the national Polish dances Krakowiak with Lajkonik, Polonez and Mazur.

Every part of the show wa

s crowned with the mutual dance with the numerously gathered audience. Everybody had a very good time and dancer were rewarded with thunderous applause.

Management and dancers of Wielkopolanie group congratulate the AL-KO company on such great anniversary and wish a lot of successes in the future.