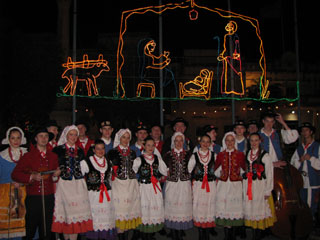 After Christmas, Folk Group “Wielkopolanie”presented Polish culture in the International Folklore Festival in Malta. Wielkopolanie received the invitation to participate in this event from the mayors of three cities: Kalkara, Zebbug and Tarxien (they were also organizers of this festival). By leaving snowy Poznań, no one did not expect that after 2000km dancers get off the plane in the middle of summer. Group has welcomed by beautiful summer weather and temperatures above 25 degrees celsius. Next day, artists from Poznań had opportunity to visit Mdina (ancient capital of Malta) and Valetta (present capital city) and also learn about the history of Malta strolling among the narrow streets of charming towns. On the first day the group could present his artistry to citizens of Kalkara. Concert of “Wielkopolanie” was preceded by a march through the streets of the festively decorated town. Among the hanging and illuminated decorations, the most amazing things were Nativity scenes issued by residents in their windows. After a

ceremonial concert in front of the mayor of the city. “Wielkopolanie had chance to sing for the other teams participating in the festival, the most beautiful Polish carols. Next day our Folk Group showed up for the inhabitants of the town of Zebbug. Among the hundreds of people present at the march and concert, Wielkopolanie has opportunity to show themselves to governing bodies of the city. After many perfomances, all groups could enjoy traditional Maltese dishes. Another city, where Wielkopolanie presented folklore from Great Poland, national dances and dances from other regions of Poland was Tarxien. It was the third city, which co-organizing this international festival.After three days presentations of Polish folklore in different cities, the time for the New Yer’s Eve has begun. It was a very hard-working night for dancers and musicians from Poznań. Wielkopolanie danced to the people of Malta during the three concerts. The first concert took place at Splash and Fun Complex and it was addressed to the youngest, the next concert (last in 2009)

group danced around 10PM. When dancers were coming out of the hotel and walking through the town to the bus, young people from Malta wished them a Happy New Year. Ten minutes after greeting the New Year, artists have already started the first concert in 2010. On hotel stage, situated close to the sea, Wielkopolanie showed dances from Rzeszów, Spisz, Eastern Cracow and National Cracow. The whole concert ended by “Scavenger from Great Poland”, major role of the show played the team leader of Wielkopolanie Piotr Kulka. Wielkopolanie had no time for New Year’s Eve Party, so a day later they decided to organize a New Year’s Eve in the style of the twenties. At Hanka Ordonówna, Mieczysław Fogg songs and music from Lwów, the dancers enjoyed themselves excellently. Another day, namely the last day of the festival, Wielkopolanie had intended to visit the island. Making a sightseeing trip, artists from Poznań saw for examples Golden Bay (sandy beaches of Malta), Blue Grotto, temples, Valetta and many other wonderful places.

It was time to return home. Wielkopolanie left the sunny island wearing T-shirts. Poznań has welcomed our dancers by snowy streets and temperature -5 degrees celsius. The next day after return, our group began educational concerts of Historical Dances in schools and kindergartens from Great Poland.