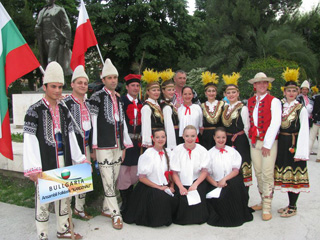 
On 5-14 of May Wielkopolanie Folk Group another time took part in the international folk festival. This time among the groups from Croatia, Greece, Italy, Kosovo, Bulgary, Slovakia and Macedonia they were guests of Aulona International Folk Festival in Vlora in Albania.

Wielkopolanie started their travel on 5th of May. After over a dozen of hours they had the accommodation in Belgrade. Next day despite the rainy weather the group refreshed and glad hit the road for further journey. They went on the picturesque route through the winding paths of Montenegro and Serbia up to the coast of Adriatic. Despite the very late hour hosts greet them with delicious Albanian supper.

After night preparation on 8th of May the group started their participation in the festival with the parade and performance inaugurating the touristic season 2010. It took part in the scene of New Beach spa in Vlore. The group presented lyric Kujawiak and full of temperament Oberek. The ovation of the audience was as hot as the heat of Albanian sun. This day Wi

elkopolanie together with all other groups participated in another parade and official presentation of the groups on the scene by the Flamutari Stadium. At the end of the day all groups met together again on the supper and integration party where they had the occasion to recognize Albanian dances.

On the next days group presented itself in numerous parades and concerts which took part among others on the stages in Orikumii, Vlore, Petro Marko Theatre and „Ismail Quemali” Boulevard. The performances during which the group presented dances and songs from the region of Śląsk, Beskid and Kraków were always accompanied by the enthusiastic audience. Despite the tight schedule and many performances the group managed to save some time for relax and rest on the beach.

Delegation of the group took part in the official meeting with the mayor of the Vlore where they have the occasion to exchange gifts.

At the end of the festival the final performance took part which was also the farewell concert of all groups. A few times fading light during the performance of Wielkopolanie did not turn off neither the energy of the group nor the enthusiasm of the cheering audience. After supper the official closure of the festival took part. Speeches and thanks from organizers were accompanied by the gifts and diplomas exchange. The final accent of the festival were the fireworks, Albanian song performed live together with the dance.

During this travel traditionally the entrance party for new members of the group which first time went for abroad travel with group took part. The small amount of free time in Albania let to realize only the part of planned events. The party finished during the way back in Belgrade.

Albania is the country on the Adriatic Sea. It is mostly mountainous and only the small part of the country cover the plains over the Adriatic and river valleys. For ordinary European Albania is rather strange country or even exotic. Albanians are very nice people with positive attitude for tourists for whom they are very helpful. It is the nation closely linked to their culture (you can meet people in traditional clothes on daily basis) which cultivates and maintains family and national traditions.