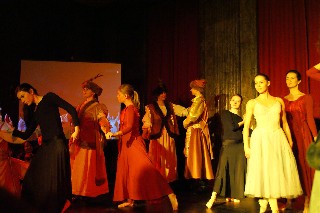 On the March 1 in the Chimney Hall of Poznan Culture Center ZAMEK, a premiere of performance “To dance Chopin?” happened, being a part of the project „Chopin on pointe and heels”. The aim of the project was to try to dance polonaises, mazurkas or etudes composed by Frederic Chopin by many artist of Poznan using different dancing techniques.

Folkloristic Group WIELKOPOLANIE was invited to take part in the project by its initiator and screenwriter Mrs. Teresa Nowak. For many weeks dancers prepared themselves to perform choreography of polonaise composed by group’s artistic director – Mr. Leszek Rembowski. The dance contained many steps and figures widely met in 19th century when Chopin lived and played. Beside this the group’s soloists: Hania Jaworska, Jasiu Galasiński i Marcin Lewandowski performed a scene took like from polish national epic “Pan Tadeusz”. The audience was charmed by this connection of music and dance.

There were many other artists performing apart from WIELKOPOLANIE, like dancers of Movement Art Group directed by Mrs. Teresa Nowak and from Poznan Hip Hip Formation “Yatey” and a soloist – absolvent of Poznan Ballet School.

Chopin’s music was played in original version on piano by Mrs. Ewa Rubinowska as well as in the remixed ones, e.g for rap-like style.

In the end all groups performed together. The audience filling completely the Chimney Hall gave big bravoes for performers proving that it’s possible to “Dance Chopin”.

WIELKOPLANIE invite for the next “To dance Chopin?” performances in May, June and October.

Now WIELKOPOLANIE prepare themselves for the next series of educational programmes for kids and youth about polish national dances. For the whole March and April they’ll visit over a 200 of school and kindergartens in Wielkopolska.