WIELKOPOLANIE CAME BACK FROM THAILAND 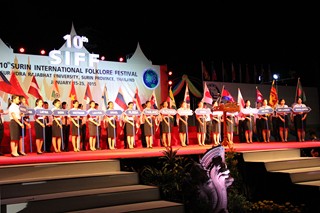 20 cultural teams from all over the world, more than 200 participations, outdoor concerts, conferences, seminaries, meetings, fashion show, exchange of experiences, international cooperation in culture. It all happened during X Surin International Folklore Festival in province Surin in Thailand. Wielkopolanie was the participant of this festival.

To participate in event were invited groups from Bangladesh, Cambodia, China, India, Israel, Japon, Laos, Latvia, Maymar (Birma), Nepal, Philippines, Russia, Slovakia, Sound Korea, Sri Lanka, Thailand, Vietnam and Poland. Student and staff of the Surin University were the main costumers of the event, but admission to all festival events was opened also too residents of Surin.

After a more than 30 hours of travel dancers came to campus in Surin, which is located nearly 600 km to the east of Bangkok. The very next day morning, the leaders of the group and delegation, took part in opening ceremony of Science and Technology Exhibition. All the most important representatives of the  Surin University and provincial authorities were appeared at this event.

In the afternoon the parade consisting all of the participants of festivals, was walked through the streets of Surin. It was first possibility to see a beauty and richness of national costumes from all over the world.

Late in the evening opening ceremony was started. The huge stage, lights, music, speeches and movie project – all interspersed with performance of folk group.

During next festival days polish songs and dances from many difference region of Poland, including Wielkopolska, were presented at the stage, arousing enthusiasm among the Thai audience. Every performance of Wielkopolanie was ended by ovation.

Organizers wanted not only present native folklore of invited delegations, but also wanted to exchange of experiences of culture and populate world peace. Therefore, every day Wielkopolanie take an active part in meetings throughout of the University, among others Surin International Art Competition, International Conference on „Cultural Geography” , III International Storytelling Festival. During all this meetings, the participants tried to find the most suitable system, which is essential for the development of national culture, and thus the world`s population.

The important role of culture in maintaining peace in the world was being appreciated. During this meeting has been signed memorandum of understanding between Surin University and Folk Group “Wielkopolanie” about cooperation and exchange experiences about art and culture.

Fashion Show considered of several parts. Firstly,  the costumes inspired by traditional tai dress and evening dress was presented.  All creations were designed and sewn by students of the Surin University.

Polish folk costumes were absolutely brilliant presented by Magdalena Effert and Wojciech Frącek. However, the biggest emotion aroused the part in which foreign guests presented authentic tai costumes. This show, which makes us very happy, was opened by Paweł Zawadzki – dancer of Folk Group Wielkopolanie – dressed Thai Bird. A few moments later, Swan Quenn (played by Maria Kaczmarek) was appeared on catwalk, leading another beautiful dressed ladies. Polish Trio in the show was closed by Tomasz Sabok-Rzepka, dressed by warrior dragon. What is very important, every delegation had representatives in the fashion show, so it was absolutely unique.

The festival organizes do not forget about show their guests country, their religious, monument and culture. Wielkopolanie took part in many meetings with Buddhist monks. All of us together pried for heath and well-being. Leading prayer emphasized, however, that despite the fact that we are followers of different religious, equal one God unites us.

Because of fact that Surin province is the world`s largest concentration of elephants (living here almost 300 elephants), all of participant visited the famous little town of elephant. It was possibility not only to see this huge animals, but also to touch them, take a photo with them and what is more sit on them and go for a short ride. Surin is very famous also for the production of silk. Besides of possibility to buy silk products, participants can see for yourself how complicated activity is silk production.

During the entire stayWielkopolanie could observe Thai customs and what is more important enjoy the world famous Thai food. Our pilot Pati, every evening organized for us some delicacies od Thai food, including the most famous dish – Pat Thai.

During the closing ceremony, organizers thanked everyone for coming. This evening Folk Group “Wielkopolanie” received the award for the most charming performance during festival.

This trip, because of great organization, will be long remind in memory of dancers. We hope that established contacts, will be have results in the future.