„WIELKOPOLANIE” AT THE ALTAR 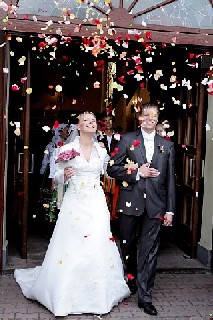 Martha and Gregory met six years ago on the occasion of the parade commemorating the 750 – anniversary of location of the city of Poznan, which was attended by group “Wielkopolanie”. The first meeting of Martha and Gregory took place after the parade when the group members celebrated this special event together with friends. Among

those friends appeared Gregory, who had been friends with a few dancers of the group, but he had never met Martha. Since that time they became inseparable pair, which after three years resulted in engagement and led the two of them at the altar.

After the ceremony the wedding couple left the church between the rows created by dancers of the group dressed in costumes from Lowicz region. In front of the Church band and dancers prepared for Newlyweds special repertoire of songs from various regions of our country. They were performed during the extending of compliments by the crowd of gathered guests.

At the end Newlyweds’ car was stopped by the dancers so that the Groom could make donations which according to the tradition brings good luck for a new marriage. Then there was wedding party until the dawn, at which “Wielkopolanie” and gathered gu

The party lasted until sunrise. It was very successful wedding, and then as successful after party called “poprawiny”.

Management and Dancers of Folk Group “Wielkopolanie”express their wishes of happiness and joy in a new way of life for the Newlyweds !!!