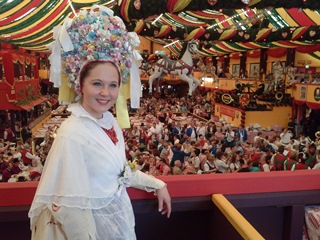 Folk Group “Wielkopolanie” late evening on 19th of September left to the Germany, to present a very rich folklore of our country. Dancerswere invited to participate in the XVIII of Polish-German Cultural Festival for Children and Youth “Together with the Common Europe” – Munich 2013.

Festival “Together with the Common Europe” was organized by the Polish Association in Munich and had to show the beauty of Polish culture in dance and song.

The concert was attended by over 200 young artists from the Polish and German inter alia: Folk Group “Wielopolanie”, dancers from “Dance Center” dance school – masters of Polish, European and World competitions in hip-hop dance. In addition, the festival was attended by winners of song festivals, finalists prestigiou

s television programs such as Polish Got Talent, X-Factor, and more. Kinga Skiba, the young singer who audience had chance to admire in “Got Talent” TV show and Michał Szpak known from the X Factor TV show appeared on the stage.

TV series Rodzinka.pl and Kacper Zborowski-Weychman – actor and singer. The project was realized by the support of Federal Government of Culture and Media, Foundation for Polish-German Cooperation, The Polish Community Association and The Office of Country Bavaria. Additionally, the big distinction for the group was the participation in Oktoberfest Great Parade, where Wielkopolanie could present traditional, folk clothes during seven kilometres walk as the only Polish group.

Over 100 groups, mainly German, took part in the parade. The dancers presented their national costumes to many thousands of audience. The origin of hop harvest festival in Munich dates back to 1810. It is one of the bi

Oktoberfest is held annually since 1810 in late September and October and its one of the biggest folk festivals in the world. in recent years, the average number of visitors was six million people. Festivals called Oktoberfest weren’t uncommon in Bavaria. Their aim was to waste large amount of beer until breweries season started to brew a new one. The Munich Oktoberfest enjoys a more than 200-year tradition. Since 1886, Oktoberfest traditionally starts with Oktoberfest’s Hosts Parade. A procession is led by the Munchner Kindl (pretty girl), symbol of the city in number of cultural events. Behind them was the cab with the Mayor of Munich. At noon precisely at 12.00 the mayor by the reflection of the first barrel of beer in the tent Schottenhamel, officially begins Oktoberfest. Wielkopolanie, and this time, came back from another artistic journey full of new experiences and unforgettable memories.