WIELKOPOLANIE ARE THE BEST 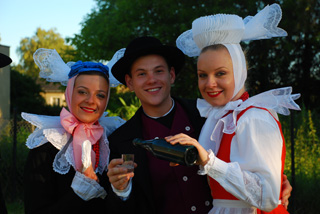 Łowicz’s Cultural Centre hosted and organized Polish National Folk Meeting “O Łowicki Pasiak”. The festival takes place since 2002 in the last weekend of June. It is accompanied by a contest of folkloristic groups selected by the jury, numerous supporting concerts, the concert “Łowickie granie” and hand-made art bazaar. During these friendly events, there are organized workshops for choreographers and managers, art handicraft fairs, horse riding, promotional sales records and publications of Łowicz, tastings of regional dishes and many others. Traditionally, along the road leading to the band shell, has issued a number of stands representing folk crafts. Willing to purchase were enough. There were also stalls with good food, prepared by the Rural Circle and stands with gadgets from Łowicz, where everyone could purchase a local coin Księżaków 7.

Based on notifications submitted by numerous teams, Artistic Commission emerged following groups in order to present themselves before them on stage in Łowicz:

The level of all artistic programs presented by the teams was very high.

“Wielkopolanie” presented before the Committee of Art and many thousands audience the following artistic program:

“Oj siano siano” – dances and chants from the Eastern Cracow

Dances were choreographed by Leszek Rembowski, music by Stanisław Horbik.

In the category of developed groups

In the category of authentic groups

This is a very great honor for „Wielkopolanie”. We are very proud that we won another so important for folk’s world prize, valued throughout the country.  Artistry appreciated by the jury was strongly applauded by the audience gathered in large numbers in Łowicz’s band shell. After the concert the audience approached and congratulated the dancers for a high artistic level. Also asked for DVD with our program, because as Maria Chojnacka (a teacher from Łowicz) said, “Wielkopolanie” made her cry with dancing Kujawiak with Oberek, and she also thought that the group is the professional one.