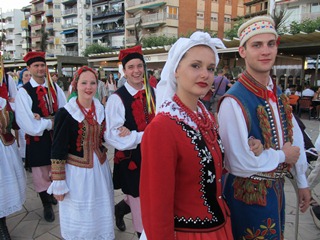 En route to festival 60 dancers and musicians visited Lyon, city in which brothers Lumiere have invented their first cinematograph and made their first film. It’s historical part fascinated our artists. Dancers were able to see: Notre Dame, Lyon Cathedral, Lyon Theatre Romain and many other monuments, which figure on UNESCO list of world heritage sites.

Except for polish groups, in the festival took part groups from France, Spain, Turkey and Serbia. The biggest attraction prepared by „Wielkopolanie” and „Cepelia” was specially for this festival prepared song from Catalonia, which was strongly applauded by large audience. Citizens of Blanes and international turists were able to admire polish dances, music and songs not only during concerts but also during parades, which led through long and beautiful promenades.

Each tour is also the time to christen those, who are on a festival in foreign country for the first time with „Wielkopolanie” group.

rs, from both groups „Wielkopolanie” and „Cepelia”, had to face challenges invented by older and more experienced friends. Fun and laugh lasted for many hours, even citizens of Blanes and tourists took some part in this event.

The festival ended very fast. After congratulations and diplomas received on stage, „Wielkopolanie” started their journey back to Poznań. En route they have visited Strasbourg, where they’

ve seen Cathedral of Our Lady of Strasbourg, Opéra de Strasbourg, Synagogue of Peace, Rohan Palace and so called „Petit France”. The last place that dancers have visited before going back to Poznań was the European Parliament.

101st artistic tour of „Wielkopolanie” has ended and the group had finished next season of hard work.