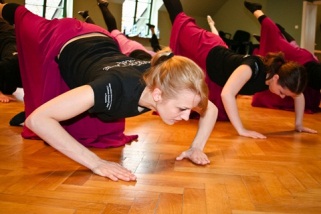 Between 13th and 15th of April 2012 Folkloristic Group “Wielkopolanie” was in ithe House of Creative Works and Relaxation of Adam Mickeiwicz University in Obrzycko, as a

part of agreement of cooperation between the University and Provincional Public Library and Centre of Cultural Animation.

The group went to Obrzycko for a training camp to perfect its dancing and vocal skills. That were three days of hard work and effort. During whole-day rehearsals dancers improved their dance technique as well as worked on the repertoire to be shown during anniversary concert.

hies that were “polished up” there were dances of sub-regions of Wielkopolska, national dances and ones of other regions of our country.

During trip there was also time for integration and relaxation after hard and long rehearsals. In the evening, after organized “Stalking” game, dancers gathered around a campfire, where everyone could sing popular folk songs. Motto of the integration meeting was: “Use your head!” Dancers showed extraordinary creativeness and ingenuity in its interpretation.

Fragments of prepared during the camp program will be shown during performances in May, when inhabitants of our city and region will have opportunity to watch them.