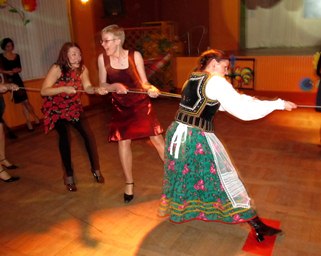 The dress-up competition was won by Krakowiacy, but as everybody showed a lot of bright and original ideas,the choice was very difficult for the jury .

Eve party which was inspired by traditional Polish folklore. The hall, decorated with folk art paper cutting from the regions of Łowicz and Greater Poland, became the ballroom where former dancers and friends of the Group could have good time all together. Each participant of the event added an element connected with the subject of the party in his outfit, which is to say the folk accents from every region of Poland. The ball played host to the “natives” of Krakow, Grater Poland, Łowicz and Highlanders.

The traditional fortune-telling customs were also present. In the specially prepared play area everybody could expected some perditions and omens for the next year.

Apart from that, dancers of the Group organized numerous competitions connected with folk customs, traditional art and music in which all guests were contending. Competitors had to display their knowledge about music, songs, national costumes from different subregions of our country. Among all contests “T

he tug-of-war of Housewives” appeared as the most popular one. Guests from all banquets tables were competing for the first place the night away. The winner received the basket of sweets.

The folk and ritual songs couldn’t be missed neither.

In the atmosphere of joy and laugh everybody danced the night away at a ball!