THE DAY OF LIBRARIAN AND LIBRARIES 2008 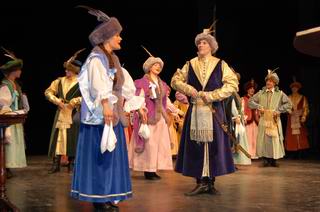 In the ceremony took part librarians and representants of local government. Gala was started with steps of polonez and mazur prepared by Fokloristic Grou “Wielkopolanie”. Then was time for the speech of the marshal. After interesting speech it was time for giving the prizes and nominations which were given by the ministry of the culture. It was an occasion to be proud of work of the librarians, their professionalism and work for promotion of culture.

In a group of people who were nominated for the prize “Zasłużony Kulutrze Gloria Artis” were Teresa Tomsia and sergiusz Sterna Wachowiak.

Moreover the Government of Wielkopolska gave the medal „Zasługi dla województwa wielkopolskiego” chich was given to Wielkopolska Public Library and the Center of Animation of Culture. Also the director if Library ms Helena Bednarska got the honorary medal of Stowarzyszenie Bibliotekarzy Polskich.
As the tradition says on the ceremony of the Day of Librarian was announced the best Library of our region organized by the marshal of the Wielkopolskas region.

For the first time marshal gave the gratulations letters for the members of “Wielkopolanie”. From the staff of the group letters were given to: Piotr Kulka, Leszek Rembowski, Stanisław Horbik, Barbara Florek. From dancers: Katarzyna Seredyńska, Marta Kolasińska, Grzegorz Lesiuk, Radosłąw Pawliński, Michał Wawrzynek and Maciej Sierpinski who danced for “Wielkopolanie” for the last time.

After the speech of prof. Hab. Waldemar Łazuga rector of Wyższa Szkoła Nauk Humanistycznych I Dziennikarstwa „Refleksje o książce” started the performance of the „Wielkopolanie”. Group presented dances and songs from many regions: bamber dances, dances from Beskid Śląski and Silesians, Kujawiak, Oberek. The performance ended with Krakowiak with Lajkonik.