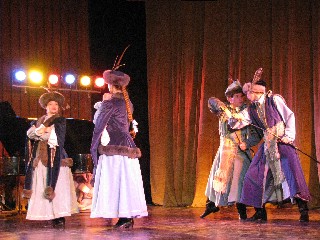 The idea of a concert is to dance Polonaises, Mazurkas and Etudes composed by Frederic Chopin in various dance techniques by Poznan artists, with Folk Group „Wielkopolanie” among them. During the concert Chopin’s music has been combined with the unusual spectacle of dance.
Frederic Chopin was born in 1810 in Żelazowa Wola. His adventure with music, has already started at the age of six, when he started to attend lessons on the piano. Soon there were also the first attempts at composing and his first piece, Polonaise B-dur, was saved by his father’s hand.

Chopin played in the salons of the aristocracy, and participated in charity concerts. At the age of sixteen he began his studies at the Warsaw School of Music. During this period, a very significant impact on the development of his talent had contact with folk songs and dances. Chopin played concerts in Berlin, Vienna, Dresden and many other cities in Europe. In September 1831 he arrived in Paris, where he settled down, soon gaining a European reputation. In the first years in Paris Chopin gave a lot of concerts. Performing his own music, he strenghtend more and more his position as a composer and pianist. Thereafter, Chopin has focused primarily on composing, issuing his works in France, Ge

rmany and England. The main source of subsistence, however, was teaching activity, he had many students. He was a very sociable man, tieding friendly contacts with prominent musicians., reviewers and the entire Polish emigration

Since 1839 composer suffered from tuberculosis, his condition worsened every year. The last concert tour in England and Scotland took place in 1848, he gave on the November 16th last public concert, after which he wasn’t able to play anymore. After returning to Paris he did not regain health.
He died on 17th October 1849 and was buried at Pere Lachaise cemetery in Paris.
Chopin took from a very wide range of existing composing species and used them in his works such as: etudes and sonatas. In addition, he created a new species, such as mazurkas. However, a very significant place among all the tracks involved took Polonaises and Mazurkas, which he created lifelong.
Chopin is considered the greate

st Polish composer untill now. The role of his music, from which almost all Polish composers for many generations alluded, went far beyond the music.
The great majority of all the compositions written by the eminent composer are designed for solo piano. In addition, there are pieces for piano and orchestra, piano and cello, trio for piano, violin and cello, and songs for voice and piano.
In the concert tributed to Frederick Chopin, where you could see the pieces of the great Polish composer preseted in an origial way participated “Zespół Plastyki Ruchu”, „Zespół Yatey”, students of the Ballet School and the Folk Group “Wielkopolanie. Songs played on the piano performed Ewa Rubinowska. The idea of the whole project came from Ms. Teresa Nowak.
MO tł. JM