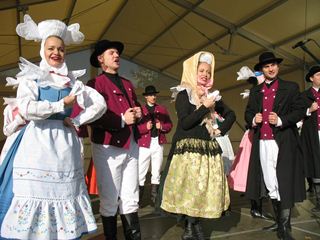 ri-Food on festival dedicated to thepotato – “Poznańska Pyra”.This event is organized as part of the European Heritage Days 2012.

Thousands of visitors in the Museum could see the traditional way of practicing potatoes, including manually digging out and laying in mounds.

Museum has exposed thier machines for the cultivation and harvesting of potatoes, including the historic steam locomotive produced in 1919 in Hipolit Cegielski Works in Poznan. You could also try traditiona

Attraction for visitors were also shows of Folk Group “Wielkopolanie”. In thre

e scenes artists from Poznan presented dances and chants from Poznan and southern Great Poland as well as folklore of other regions of our country. These performances were interspersed with catering shows, competitions and quizzes.

Festival at the Museum of Agriculture in Szreniawa is part of a tourist program realized by district of Poznan – “Naturally, around Poznan”; this program is supposed to show the richness of flavors and culinary traditions connected with the area of the county.