SUCCESS OF „WIELKOPOLANIE” IN CHILE 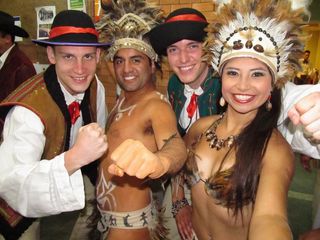 At the invitation of  CIOFF International Council of Organizations of Folklore Festivals and Folk Arts in Chile, Folk Group “Wielkopolanie” in late Januaryand early February went up in 104 artistic journey. Chile was 53rd country in the world, which in the history visited Poznan artists. “Wielkopolanie” participated in the first International Folklore Festival organized in Con Con and Santiago de Chile.

Among the invited teams were groups representing the both Americas, Africa, and the only one group from Europe – “Wielkopolanie”, groups presented a very high artistic level by presenting dances, customs and rituals of their countries. It was a great honor for “Wielkopolanie” group which was selected by CIOFF Poland.

During the 16 concerts and street parades “Wielkopolanie” were applauded by the audience of thousands gathered in large numbers. For their presentations of polish folklore Wielkopolanie always received a standing ovation. The big surprise for the Chilean public was performed by the “Wielkopolanie” chilean song „YO VENDO UNOS OJOS NEGROS”. Prepared by Stanislaw Horbik especially for this trip folk, well-known song was a great surprise to the natives. They sang along with the dancers applauding them during and at the end.

While participation in the Festival Management and Dancers all teams had the opportunity to meet with the President of Con Con, during which there was a presentation of invited groups, and presented them to the history and traditions of the region.

A great honor for the “Wielkopolanie” group was also home visit at the invitation of one of Chilean families. “Wielkopolanie” were the only team that had a chance to learn about the traditions and cuisine of this country.During the meeting also had the opportunity to listen to traditional Chilean songs and dance along with the hosts.
„Wielkopolanie” were also invited by the Grupo Folclorico MAUCÓ on the day of chilean games. Dancers and Musicians had the opportunity to learn traditional games targeted for children and youth. Extremely happy fun resembled in its course many polish games performed by our ancestors in the meadows and backyards.

Organizers also guaranteed for the “Wielkopolanie” visiting the most beautiful places of Chile: President Palace and other beautiful monuments in the capital of Chile, amazing monuments in Vina del Mar, Valparaiso and Renaca.

Twelve day stay in the longest country in the world, the most developed among the countries of South America, extremelyexotic andfaithfulto their traditionswill always remainin the memory of“Wielkopolanie”, who are glad to be able to show the Polish dances, customs, present popular folk chants several thousand kilometers from the native Wielkopolska.