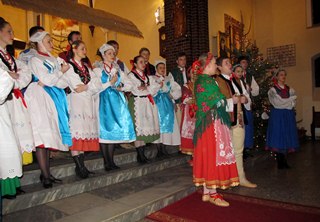 Christmas is behind us. In this unique period of Christmas and New Yea

r, the city of Poznań has invited their residents to join carol singing. It has been organised five times before by the Town Council of Poznań in university halls and churches.

Among the artists invited from entire of Poznań, there was also a folk group “Wielkopolanie”

This year the “Wielkopolanie” prestented at the Exaltation of the Holy Cross Church.

The concert began with the rhythm of the polonaise carol “Bóg się rodzi”.

Procession of dancers went through the center of the church nave to the altar. Artists have been dressed in costumes from Wielkopolska, Spisz and Rzeszów. They san

Pastorals are beautiful tradition in polish folk. When the church auth

orities ban Christmas pageant in the first half of the eighteenth century, the folk tradition began to shape.  Villages quickly met church carols and began to create a new ones, called pastorals. Their theme is shepherds trip to Bethlehem – Polish countryside, shepherds with popular names who guard the flock against wolves and play on traditional folk instruments.

The folk group Wielkopolanie has in their program pastorals from the late nineteenth and early twentieth century. Pastorals developed by Stanisław Horbik were played on

traditional folk instruments and performed during the 1-hour concert.

Program included pastorals from Wielkopolska, Rzeszow, Spisz, Kraków, Warmia, Mazury, Śląsk and many other regions of Poland. All pasotrals were connected with tradition of dancing to the Child Jesus. The concert ended with thunderous applause and standing ovation. Wielkopolanie along with numerous believers performed one of the most famous carol from XVIII century “Pójdzmy wszyscy do stajenki”.