ST ANDREW'S JOURNEY AROUND THE WORLD 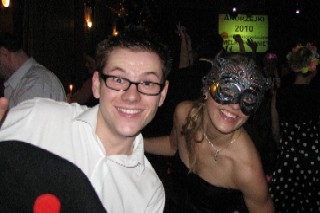 On 26th of November 2010 the St Andrew’s party organized by the Wielkopolanie Folk Group took place. The board of the group decided to introduce the leitmotive in the shape of traveling around the world to make the party more attractive. Every attendant of the party diversified his outfit with the element derived from different country.

The following time the constant attendants of the band-organized parties did not let down and flooded the whole dance hall. In colorful dresses the present and former members of the group played together with their families and friends by the music made by DJ Fąfer known for making music at Wielkopolanie’s parties. Of course the traditional fortune telling was not missing. In specially prepared fortune telling niche every attendant could check the surprises coming in the next year.
Additionally in this year different contests linked with traveling were organized in which all attendants of the party could take part. The competitors had to show their rich knowledge about other countries. Their task were to recognize the characteristic monuments, dishes, headgears or songs from such countries as China, Brazil, Nepal, Italy and many others.

The competition was surprisingly high because the attendants proved themselves with incredible knowledge.

The surprise for attendants was the election of the Miss and Mister of the party. The most important criterion was the dress. The choice was very difficult because a lot of attendants had outstanding, original and creative dresses from different countries. After big discussion the verdict was delivered: The Miss of the St Andrew’s party became Mrs Grażyna Rogalińska in the dress of Spanish women. The Mister of the St Andrew’s party became Tomasz Świderski who distinguished himself with the impressive dress of Arabian man. Also the general singing of all attendants and the Wielkopolanie group singing was not missing at the party. All attendants together had a good time up to the early morning of the next day.