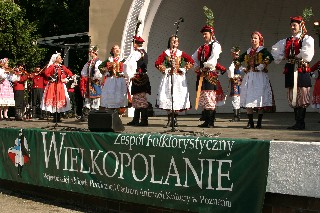 On the 5th of June Folk Group “Wielkopolanie” arrived in Piła, where at the Cultural Center group performed with another one of this year’s “To Dance Chopin” concerts series. For more than 400 students of primary schools and gymnasiums, along with many artists from Poznań, group’s dancers demonstrated how in different ways and in different techniques people can dance to the music of Chopin. The whole show was directed by Ms. Teresa Nowak.

On the 6th of June “Wielkopolanie” performed during “Dni Puszczykowa” event. In a beautiful forested scenery in the Warta River’s curve “Wielkopolanie” presented Greater Poland’s folklore, as well as dances and songs of other regions. For the audience they also presented lyrical kujawiak , vigorous oberek and krakowiak dances. For “Dni Puszczykowa” event The City Hall had not only prepared performances by “Wielkopolanie” but participants of the event had also the opportunity to attend various sport games, watch exhibitions prepared for the occasion and applaud other Polish artists.

Especially for citizens of its own town Folk Group “Wielkopolanie” along with Mercury Radio prepared on the 7th oh June meeting with folklore at Wilson Park in Poznań. In the artistic program specially prepared for this occasion numerously gathered viewers had a chance to see:

and national dances such as kujawiak, oberek and krakowiak

In such a busy way dancers and musicians of “Wielkopolanie” spent the first days of June. Soon, on the 10th of June “Wielkopolanie” will familiarize German youth with their culture during the meeting organized by the VII Secondary School in Poznan.