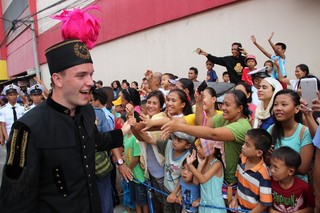 In long history Folkloristic Group ‘Wielkopolanie’  has repeatedly taken part in many international folk festivals. Some were bigger, another place. They were held in Poland, Europe or other continents. Wielkopolanie gave full-length concerts or appeared before the very-selected audience. Each of these trips was different and make your way exceptional.
Nevertheless, let`s try to attempt a few key components that made up the unique trip (at least those dancers who took part in it).

Festival in the city of Koronadal was organized for the first time. All thanks to the president of the Canadian Section of CIOFF Mrs. Lettie Wheeler, who is  Filipino . The first organizational meeting was held as early as 2010. Since then sustained actual preparations for this unique event. At the head of the organizing committee he stood alone Koronadal City Major Peter Miguel. The organization joined the city council and other local government institutions. Inclusively, at the festival employed over 2,000 people.

‘Wielkopolanie’, like all the bands participating festival (Turkey, Mexico, Sri Lanka, Slovenia, India, Thailand, China, Japan, and 5 groups from the Philippines) were treated as an official delegation from the city of Major Peter`a Miguel` a.  Therefore, at every step of Wielkopolanie , he paralleled protection (officers), traveled with the convoy of the police since we  appeared on the tarmac in General Santos.

The necessity of protection wasn’t  the result of a threat to the festival participants but it was a need to ensure them at least a little privacy.  All the inhabitants of the Philippines wanted to see personally the participants of the festival, to touch them and take pictures with them. Exoticism of Poles in the Philippines made the Wielkopolanie  enjoyed the greatest interest of the public. Wielkopolanie for 10 days felt like a true Hollywood star. They posed for countless pictures, especially popular selfie.

Festival in Koronadal enjoyed an extraordinary media attention, not only local, but national. Full-length concerts have been broadcast live on national television the Philippines. On the first day there was a press conference attended by journalists from various parts of the Philippines. The whole region of South Cotabato was adorned with billboards and posters on the festival, including separate posters for each delegation. All events were filmed and photographed.

The festival parade, on a day off from work, ordered by Major in connection with the start of the festival, attended by virtually all residents of Koronadal and the surrounding area. Despite the enormous heat, this event will always remain in the memory of the dancers. People screamed, cheered and were delighted by the presence of the participants of the festival

Despite the very tight schedule of classes, meetings and accompanying events, the organizers also assured of one day off. During free day ‘Wielkopolanie’ visited Sebu Lake, the largest lake in the area, where they flew ZIP LIN`em suspended 700 meters above the ground. They tried Filipino food, learned their dances and culture.

Thanks to a visit to the real Philippine village near Koronadal, they saw how Filipinos live every day.

Above all, however, they will remain in the memories of Wielkopolska wonderful people who met in the Philippines, ranging from pilots to organizers, the villagers in which we hosted. It`s hard to describe the joy, optimism and spontaneity Filipinos. One thing is certain, the charged their batteries for a long time, taught them how to enjoy with everyday matters and disregard for material goods.
Kanami Koronadal