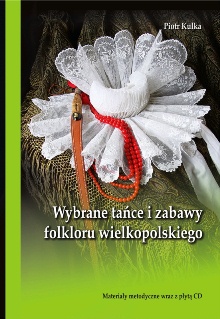 The book, along with the CD, called “Selected dances and folk games of Wielkopolska” released by the Provincial Public Library and Cultural Animation Center in Poznan, was presented at the Jublee XV Days of Scientific Books.
The fair under the auspicies of the Minister of Science and Higher Education prof. dr hab. Barbara Kurdycka and President of Adam Mickiewicz’s University prof. dr hab. Bronisław Marciniak is held between 12 and 14 of October 2011 in Collegium Maius. Among the many exhibitors from across the Poland, the Provincial Public Library and Cultural Animation Center presented its own station with many publishers.  Among  them we presented our book established with the CD for the first time in history of “Wielkopolanie”.
The publication was created by Piotr Kulka, because of demand stemming from teachers and instructors participating in clas

ses of the improvement of courses devoted to children’s folklore of Greater Poland. Those activities were organized by “Wojewódzka Biblioteka Publiczna i Centrum Animacji Kultury“ (Provincial Public Library and Culture Animation Center)  in Poznan and “Ośrodek Doskonalenia Nauczycieli” (Teacher’s Training Centre) in Poznan with the Folk Group “Wielkopolanie”. Theirs theme was help in achieving of the objectives designated by institutions of culture and education concerning knowledge about the cultural heritage of Greater Poland.
Range and form of the material contained in this publication, in author’s assumption, is to come with substantive and methodological support to teachers and instructors working with children.

Therefore included materials covers knowledge about dances and games from many sub-regions
of Greater Poland, in the descriptions of movements, along with the music on the attached CD. The content of the publication consists of descriptions of dances and games, each with its own characteristic, traditional steps, dancing figures and their exemplary execution. Material on CD was developed by Stanislaw Horbik and recorded by the Folk Group “Wielkopolanie” of “Wojewódzka Biblioteka Publiczna i Centrum Animacji Kultury” which cooperates with Adam Mickiewicz University in Poznań.
This material will be undoubtedly practical aid for instructors and it will show the diverse richness of music and dance folklore of Greater Poland by selected repertoire and original instrumental arrangements of the band. Material included in this publication is a selection of traditional forms of dance and games performed mainly by children, as well as in adults’ tradition.