NIGHT OF MUSEUMS IN POZNAN 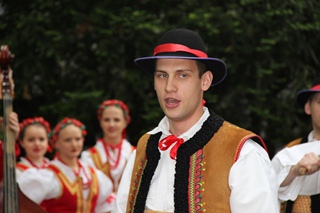 First Night of Museums held in Berlin in 1997. Due to the high interest in this event, started to organize similar events in other cities. Currently, organizes them more than 120 cities in Europe. In Poland, the first Night of Museums organized in 2003, in Poznan National Museum. Museums in addition to the permanent exhibition, offer to visit a specia

On 17th of May the eleventh time Polish museums have invited visitors to their buildings at night sightseeing. Posnanians had the opportunity to visit not only the permanent exhibitions, but also participate in specially for that night events: city and historical games, lectures, special exhibitions and watch films. Its doors opened to the public, inter alia: National Museum, Museum of Musical Instruments, Gallery of Painting and Sculpture, Museum of Ethnography and many, many more.
Folk Dance Group „Wielkopolanie” during this year’s Night of Museums, once again presented himself at the Ethnographic Museum which is inseparably connected with the activities of the Ethnological Society, f

Poznan artists presented large audience folklore from the area of Krobia and Domachowo and also dances and songs from Jurgów and Kacwin region.

In that special night “Wielkopolanie” also danced during Nationwide C

In addition to meeting with the folklore of the Ethnographic Museum visitors had the opportunity to, inter alia, changing the things worn by the great-grandmother participate in a workshop performance of paper memorabilia, creating cut-outs, as well as listen to the Oskar Kolberg’s tales.

Night of Museums in Poznan again attracted thousands of residents of the city and region.

The event, which from year to year is becoming richer offer gives you the opportunity not only to explore the exhibitions and exposure for free and in one fell swoop, it is also an opportunity to learn about the activities of many institutions “from backstage”.