NIGHT OF MUSEUMS 2012 IN POZNAŃ 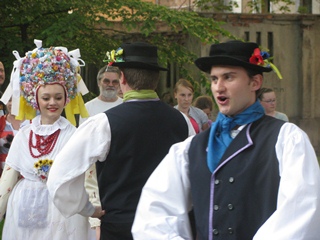 Thousands of people took place in the 10th Poznan Night of Museums, which watchword this year was “The Opening of Museum”. This year in our city almost 30 cultural, educational and scientific institutions took part. All of them are joined by the mutual idea of “Open Museum” – they showed the exhibits usually not open for public and visitors could talk about them and learn the secrets of running the museum.

All departments of the Poznan National Museum took part in the event, including the Ethnographic Museum where the bagpipe bands tournament took place. The tournament is organized in Poznan since 1975 with the aim of protecting the bagpipe music and the rare and precious instruments.

During this year’s edition of the tournament Wielkopolanie presented themselves in the couple of performances. They started with the dance of Bambry Poznańskie. Next they presented on stage the program called “W gościńcu”, containing the dances and songs from the area of Krobia and Domachów. After that the carnival custom from the land of Lubuskie called “Idziem sobie po rożnie”. Very beautiful, traditional national costumes especially drew attention of the audience that in large numbers visited the museum.

The folk group Wielkopolanie danced and sung during the Night of Museums for the next time but simultaneously the artists prepare themselves to the next edition of “Spotkanie z folklorem” which will took place on the 3rd of June in Wilson’s Park in Poznan. During the concert, which is organized in frames of the celebration of the 50th anniversary of the group’s activity, dancers will support the Foundation Dar Szpiku im . Apart from Wielkopolanie on the stage will perform also Folk Group Kębłowo, Folk Group Marynia from Wronki and Kid Folk Group Cepelia from Poznań.