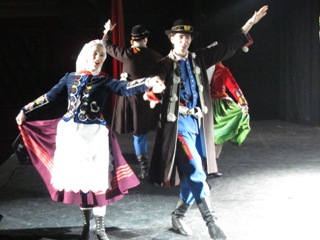 II International Folk Festival Monte Carlo – Nice was the meeting place for folk ensembles from Poland, France, Italy, Ukraine, Bulgaria, Romania and Greece. During the festival, “Wielkopolanie” for the first time visited, second after to the Vatican, the smallest country in the world Monaco. The Principality of Monaco has a rich culture, but largely drawing on the achievements of the neighboring countries .Monaco includes a rocky headland with a height of 65 m narrow strip of Mediterranean coastline where only 32,000 people live. Among the Mediterranean climate, where Wielkopolanie Group welcomed all the seasons from winter to summer, the team presented their regional folklore, but also showed dances and chants from Łowicz and Rzeszow. In Mediterranem Palace Theatre, where a concert gala held, “Wielkopolanie” met with great appreciation and admiration especially from Romanian group, which wants to invite artists from Poznan to their folk festival.

For Wielkopolanie the most impressed was Monaco. They took part in the changing of the guard of honor in front of the Palace of Prince Albert II Grimaldi. Casinos, attractions and real summer will stay for long in the memory of dancers and musicians. Festival for Wielkopolanie it is not just the performances. Every free moment the young dancers and musicians devoted on the creation of a new item on the artistic program. During their stay and travel grinding dances and chants from Poznan region. After several years of working with ethnographers and etnochoreographers and leading experts in the field of folklore, Stanislaw Horbik create music for “Poznański Podkoziołek” and Piotr Kulka worked on the choreography for this custom. Soon dances and songs , from Poznan for the first time in the history of Polish, pass the inauguration stage. No one have never presented a rich tradition of Poznan on stages of our country and abroad.

At the end of journey in accordance with the tradition of “Wielkopolska” christen took place of those who are on a festival in foreign country for the first time with „Wielkopolanie” group. For special tasks faced: Maria Kaczmarek, Karolina Krzywda i Damian Frajtag. In the climate of the Royal Casino in Monte Carlo, the three newcomers need to demonstrate production of film trailers, sound effects and pure luck while playing roulette.Soon after returning home Poznan artists had no time for rest. The next day they met in the training to make an easter artistic program which will be presented on 24th March at the Cultural Center in Kostrzyn during the Easter Fair. On the Kostrzyn stage will show Easter customs of the region Łowicz, folklore of Poznan Bambers and Silesian Beskids.