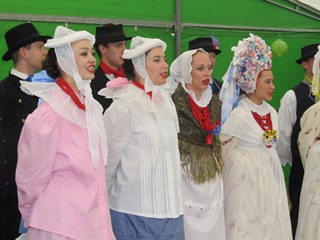 Since the early morning hours residents of Poznań had the opportunity to learn the history of three districts during the carriage ride with a guide.

The second part of the event – “Neighborhood Feast” started at 17:00 with the “Wielkopolanie”‘s concert. In speciall

y designed program the audience could see the dances and chants of Poznan‘s Bambers and former residents of Poznan city’s villages.

With this part “Wielkopolanie” wanted to show the beauty of Poznan’s folklore in music, costume and dance. In addition to folklore of Poznan city repertoire included dances and chants from around Krobia, Domachowo, Łowicz and Cracow regionst. Th

e audience had also the opportunity of additional experience because after each dance segment ‘Wielkopolanie’ invited guests to a mutual dance.

In the late evening, by the campfire, musicians of Folk Group “Wielkopolanie played the best-known feast songs with addition of songs form Lviv city.

Many other attractions were waiting for Poznan citizens in the “Nowa Gazownia” Pavilion in addition to performance of “Wielkopolanie”.

In the audio-visual hall district presentation themed “Back in time” and the projection of movies telling the stories of Jeżyce, Śródka and Chwaliszewo were held. Also in the hall, children participated in activities called “Magic Trunk” held as part of the revitalization

Folk Group “Wielkopolanie” already today invites to its next concerts – this time in Szreniawa, where on October 7 it will perform at the National Museum of Agriculture and Agro-Food Industry during the “ Święto Pyry ” feast.