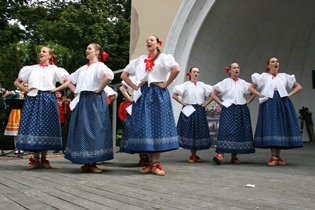 As a part of 50th anniversary of Folkloristic Group “Wielkopolanie” on 3rd of June there was a concert “Meeting with folklore” in Wilson Park. Honor patronage on this event was taken by Wielkopolska Vice-voivode Przemysław Pacia.

This extra-ordinary concert was dedicated to Anna Wierska foundation “Dar szpiku” zachęcając whole the audience to help sick of cancer.

oncert the audience could watch not only Golden Jubilee. Invited by “Wielkopolanie” children folkloristic groups of Wielkopolska also performed:

The groups not only presented their stage skills but after performance invited the youngest to teach them most popular folk games of Wielkopolska and other regions of Poland. Gathered children likely danced with artist and learned steps of folk games.

It wasn’t the only surprise prepared by “Wielkopolanie” for the youngest. The children could get familiar with traditional outfits painting a “Colour-book Polish Folk Outfits” published by the group this year and received balloons with “Wielkopolanie” logo.

Many representatives of “Dar szpiku” foundation showed on the stage also. President Dorota Raczkiewicz told about work of the institution led by her and encouraged to give the marrow, explaining how easy is to help the neediest. “Wielkopolanie” during all their performances encourage to give the marrow and support the foundation.

The very next day Folkloristic Group “Wielkopolanie” went for their 100th foreign artistic trip. This time polish folklore will be presented during Interntional Folk Festival in Batumi, Georgia.

Management and dancers of Folkloristic Group “Wielkopolanie” would like to acknowledge for accepting the invitation and performing to: