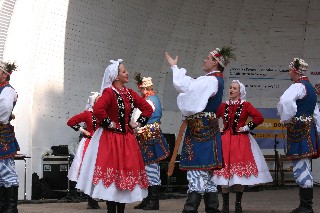 “Majówka with Wielkopolanie” is an annual meeting with citizens of Poznań, organized by Wojewódzka Biblioteka Publiczna i Centrum Animacji Kultury. For these concerts “Wielkopolanie” specially prepare separate artistic programs,

so that citizens could get to know the whole group’s repertoire. That happened this time. “Wielkopolanie” welcomed numerously gathered audience with dances from Upper Silesia choreographed by Leszek Rembowski with music composed by Stanisław Horbik. “Barbara Święta o górnikach pamięta” is the title of the first presented point of performance. After that, on the scene went students who started theirs adventure with folk group in October last year. “Wielkopolanie” cooperate with Adam Mickiewicz University for many years. Students instead of physical education in their schools could dance in the group and every time at the end of the year of work they present a performance on the

scene. This time students presented themselves in Kurpie Dances choreographed by Hanna Jaworska. Afterwards there was a time for national dances and from other regions of our country. During more than hour of performance the audience could applaud over fifty dancers.

Currently, “Wielkopolanie” are preparing for two charity concerts for sick children. The first one will be held on the 1st of June in a rehabilitation hospital in Kiekrz and the other on 13th of June at the Stadium of Lech Poznań for the integration of disabled children. At the end of June Folkloristic Group “Wielkopolanie” with present themselves before nationwide committee of art in Łowicz, during the IX Polish National Meeting of the Folk called “O Łowicki Pasiak”.